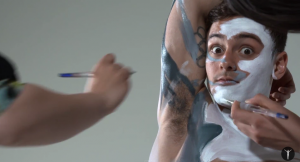 Ahead of the UK’s Shark Week starting next month, Olympic diver Tom Daley has released a video of his recent partnership with SeaWorld to help raise awareness of the threat sharks face in the wild.

He also revealed he’s more than a little bit ticklish when it comes to people touching under his arms or feet.

Perhaps unsuprisingly, some of Daley’s fans on Twitter found the 21-year-old’s partnership with SeaWorld a little fishy.

If @TomDaley1994 wanted to raise awareness for @SeaWorld he should have just lived in a bath tub for the next 20 years.

In today's WTF news, Tom Daley has been painted naked as a shark to advertise Seaworld (?!?) https://t.co/uMTsVnaFLI pic.twitter.com/zUhGBJs48K

@TomDaley1994 tsk tsk #SeaWorld has an appalling animal care reputation in its theme parks. Theres plenty of documented proof out there!

i've never really though much about @TomDaley1994 but after seeing him support Sea World – there is zero respect 4 him. shame on you Tom :/