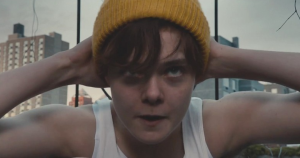 Television shows like Transparent and Orange is the New Black are doing a great job increasing transgender visibility in mainstream programming, but so far we haven’t seen Hollywood devote much screen time to the lives and experiences of trans youth.

The Weinstein Company is hoping to change that this fall with About Ray, a multi-generational family drama starring Maleficent‘s Elle Fanning as a transgender teen struggling for acceptance.

ABOUT RAY tells the stirring and touching story of three generations of a family living under one roof in New York as they must deal with the life-changing transformation by one that ultimately affects them all. Ray (Elle Fanning) is a teenager who has come to the realization that she isn’t meant to be a girl and has decided to transition from female to male. His single mother, Maggie (Naomi Watts), must track down Ray’s biological father (Tate Donovan) to get his legal consent to allow Ray’s transition. Dolly (Susan Sarandon), Ray’s lesbian grandmother is having a hard time accepting that she now has a grandson. They must each confront their own identities and learn to embrace change and their strength as a family in order to ultimately find acceptance and understanding.

Directed by Gaby Dellal, About Ray arrives in theaters September 18.