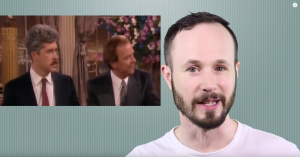 Long before shows like Glee and Modern Family, sitcoms in the 1970s and 1980s were slowly breaking ground and bringing  gay visibility to American television programming.

Writer Matt Baume has been combing through sitcoms to figure out when homosexuals stopped being a scary threat and started becoming real people with real lives and emotions.

Featured in the video are clips from Three’s Company, M*A*S*H, Cheers, All in the Family, The Paul Lynde Show, Golden Girls, and Soap.