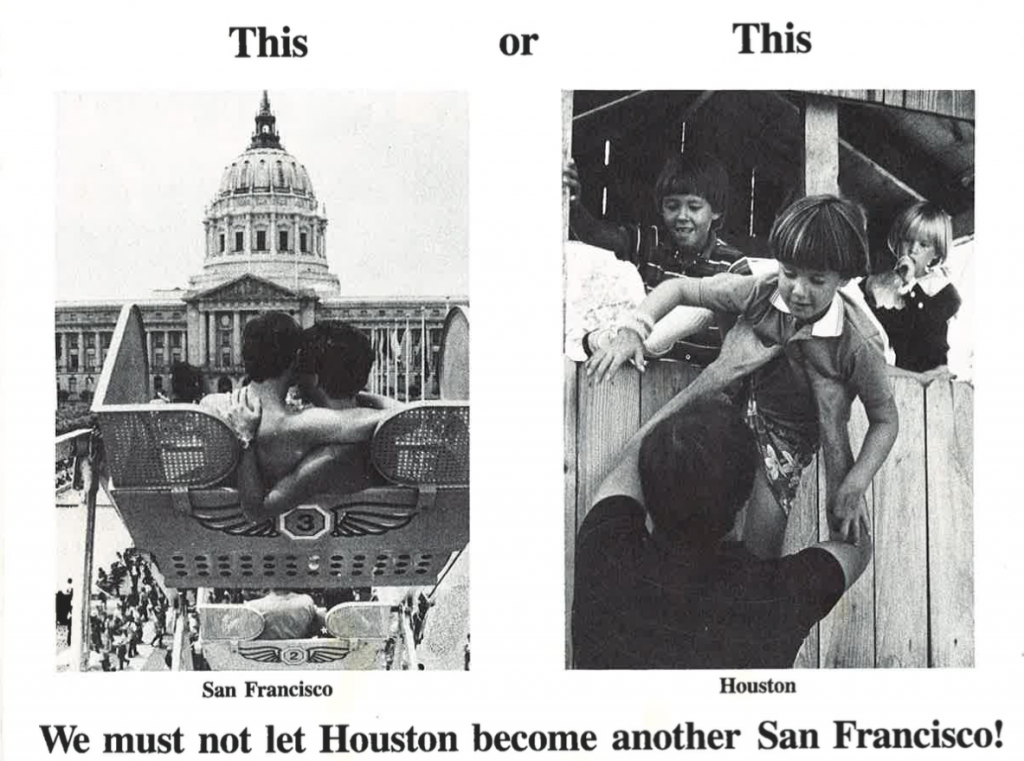 Thirty years ago, Houston mayoral candidate Louie Welch (below right) stated on live TV that the best way to control AIDS would be to “shoot the queers.” 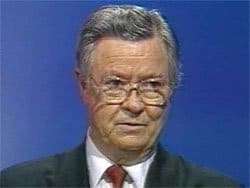 Although he later apologized, Welch’s comment proved popular among anti-gay voters in Houston, and he raised $70,000 for his campaign the following day.

Welch’s name was atop an infamous anti-gay Houston City Council ticket that year, known as the “Campaign for Houston Straight Slate,” sponsored by Dr. Steve Hotze (ad above).

Thirty years later, anti-LGBT activists have revived part of the moniker from the 1985 election, “Campaign for Houston,” in their battle to repeal the city’s Equal Rights Ordinance, which will appear on the Nov. 3 ballot.

Also speaking was the event’s organizer, Dr. Steven Hotze, who is the founder of numerous pro-family organizations including Conservative Republicans of Texas, Conservative Republicans of Harris County, Campaign for Texas Families and the Campaign for Houston, which is an organized effort to defeat the Annise Parker “bathroom ordinance” appearing on the November 3, 2015 City of Houston ballot. …

This is our time to act and I hope each and every one of you who shares our values will join with us and say, “Enough is enough!” Campaign for Houston will be launching a website very soon offering many ways to get involved in the campaign. In the meantime, you may contact the campaign by phone at 844-4-OURUSA(844-468-7872.) 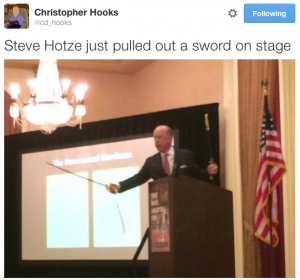 Based on Woodfill’s email, Hotze will again be a leading sponsor of the Campaign for Houston. And while no one has called for “shooting the queers,” Hotze did wield a sword (right) at last week’s rally and pledge to drive homofascists out of Houston and back to San Francisco. Not surprisingly, similar rhetoric was used in 1984, the year before Welch’s “shoot the queers” comment, during a campaign to repeal job protections for gay city employees in Houston.

Daily Kos recently took a look at the 1984 repeal effort:

Gay activists quickly organized. In addition, Citizens for a United Houston (CUH), chaired by a minister and civil rights activist, took on the cause, becoming the primary organizing vehicle in favor of the ordinance. Proponents of the ordinance took a pragmatic approach, downplaying “gay rights” and focusing on convincing Houstonians that legalizing employment discrimination would be an image problem for the City. Several businesses, churches, and professional organizations lined up behind CUH to support the ordinance.

On the other side, an unholy alliance formed between the CPA, the Republican Party, fundamentalist churches, and yes, the Ku Klux Klan. Aforementioned conservative Council Member Goodner led the CPA in the fight against the ordinance. Opponents of the ordinance stressed that it would promote the “gay lifestyle” and turn Houston into San Francisco (horrors). Goodner expressed his concern over a gay takeover in Houston and his fear of Houston turning into the Texas version of San Francisco, remarking: “…gays are effectively in control of a heck of a lot of the destiny of San Francisco.”

The CPA used scare tactics to build public opposition to the ordinance. AIDS was often invoked. In one pamphlet titled “Vote Against both Homosexual Propositions” (referring to the non-discrimination ordinance as well as an ordinance that would block record-keeping on the hiring of gays and lesbians), the claim was made that “Incurable and Other Diseases are Transmitted by Homosexuals to the General Public.” Irrational as it was, it resonated with many Houstonians in the midst of the AIDS epidemic

In 1984, Houston overwhelmingly voted to repeal protections for gay city employees, and the homophobic sentiment carried over into the 1985 election, according to Daiy Kos:

In the meantime, anti-gay right-wingers were mobilized like never before. Using the momentum from the referendum campaign, they organized the Straight Slate, the group of anti-gay City Council candidates who campaigned by reminding Houstonians: “You Don’t Have to Vote Pro-Homosexual!” They ran alongside Welch, who made moral issues a focus of the mayoral campaign. Adopting the music from Bonanza as their theme song (seriously), the Straight Slate proposed a number of regulations aimed at restricting people with AIDS. They sought to close down “sexually oriented businesses” such as bathhouses in Houston. They also proposed to require food service workers to prove that they had tested negative for AIDS.

Fortunately, the 1985 “Campaign for Houston Straight Slate” was unsuccessful, with Welch and other anti-gay candidates all losing. Let’s hope the outcome will be the same this year.