Lily Tomlin, a true showbiz legend and one of our own, has a new movie out this weekend. It’s quite a career-capper as she’s rarely been asked to carry an entire movie by herself. In fact, it hasn’t happened since The Incredible Shrinking Woman in the Seventies! All of her other leading roles were co-leads with other big stars to banter, romance, or battle with.

This time she’s in the drivers seat, quite literally, as the title character of Grandma. She plays a sharp-tongued lesbian poet who goes on a road trip of sorts with her granddaughter who is accidentally pregnant and in need of an abortion. It was one of the highlights of Sundance back in January and now it’s in theaters. You don’t have to take my word alone that Lily is super in it. Hot on the heels of her Emmy nomination for the Netflix series Grace & Frankie she’s winning Oscar buzz and very kind reviews — I was surprised and delighted to be quoted on the poster! —  even from critics who don’t totally love her star vehicle movie. So why not shill some more for the movie? Go see it. It’s not every day that a senior citizen actress gets a leading role. In fact, if her name isn’t Streep or she isn’t a British “Dame” it just doesn’t happen period.

Since I’ve previously reviewed Grandma let’s talk about Lily Tomlin’s film career in general. Many of her most celebrated career moments happened on TV or on the stage (The Search For Signs of Intelligent Life in the Universe) and in her truth her career in the movies has been spotty. But that’s no reason not to celebrate the highlights!

10 “Doreen” in Short Cuts (1993) The celebrated auteur Robert Altman made ensemble films so teeming with character actors and big stars in small roles that it’s easy to forget who appeared in which picture, but Lily has been in three of them, all of which make this list. In the California set short-story driven Short Cuts she plays a lonely waitress who is shacked up with an alcoholic Tom Waits. She doesn’t realize that she’s set off a tragedy nearby with what she thinks is a minor car accident.

Meryl and Lily made for a comfy sister act in this folksy comedy based on the radio show. Their voices sound great together, don’t you think? This was Robert Altman’s last film before his death.

08 “Edwina Cutwater” in All Of Me (1984)
Though this comedy mostly confines Lily to her bed or in mirrors as a dying millionaire whose soul accidentally ends up in Steve Martin’s body, it’s a gem. Basically Steve Martin gets to play both his own part and Lily playing his part, through his body language. Just go with it. But Lily & Steve are delightful together whether they’re sharing a body or a goofy dance.

07 “Rose / Rose” in Big Business (1988)
Will I be shunned for placing this so low? This identical twins switched at birth comedy duet with Bette Midler is beloved but Bette gets all the best stuff — don’t deny it! Still, Lily has fun with her dual roles as a fussy clumsy businesswoman and her aggressive confrontational country sister. 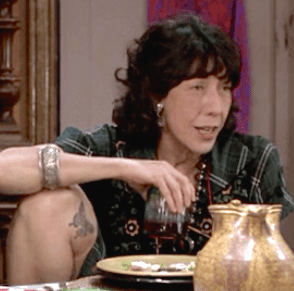 06 “Mary Schlichting” in Flirting with Disaster (1996)
The first of her two collaborations with Oscar favorite David O. Russell (of The Fighter, Silver Linings Playbook, and American Hustle fame) is a very funny comedy about an uptight man (Ben Stiller) in search of his birth parents (Alan Alda & Lily Tomlin). When he finds them, he discovers that they’re drug-selling paranoid hippies. Chaos ensues. Lily & Alan are a lot of fun but Josh Brolin and Richard Jenkins steal the show as gay lovers and FBI agents.

05 “Margo Sterling” in The Late Show (1977)
This little seen but critically acclaimed noir homage about a private detective (Art Carney) and his would be partner (Lily) was Oscar nominated for Best Screenplay. Lily even received Golden Globe and BAFTA nominations for Best Actress but no Oscar love. You can see the trailer here if you’re curious. If you’ve never heard of it, you are not alone — the film wasn’t available on VHS or DVD for many years which accounts for how forgotten it is.

04. “Vivian” in I ♥ Huckabees (2004)
Writer/director David O. Russell has become quite an Oscar player in the past few years but 11 years ago, a lot of people still didn’t know what to make of his lively and eccentric brand of filmmaking, which one of my closest friends describes perfectly as “put a lot of actors with disparate acting styles in a can and shake it!”. This bizarre but brilliant film about a sad sack (Jason Schwartzman) who turns to two “existential detectives” (Lily & Dustin Hoffman) for advice, was, by all accounts a miserable working experience on set. A viral video even went around the net years ago (before being removed) featuring Lily & Russell in a expletive filled screaming argument. David O, Russell thinks it’s his worst movie but he’s very very wrong. It’s one of a kind and Lily is magic with both her slapstick sneaking-around bits and her seriously confusing confrontational riddles.

Have you ever transcended space and time?“

03 “Violet Newstead” in Nine to Five (1980)
This now classic comedy blockbuster (second only to The Empire Strikes Back at the box office that year!) derives much of its girlpower pleasure from the well balanced trifecta of megawatt charisma from Jane Fonda, Lily Tomlin and Dolly Parton who was making her film debut! Everyone elevates this thing but Lily’s take-no-prisoners attitude (not literally – she actually takes a prisoner) and intimidating competence as the office’s unofficial manager drives much of the zany plot. And of all the stars, she’s got the best of the silly dream sequences as a perversely sadistic Snow White.

If you haven’t seen it recently, you should. It holds up and it’s quite a weird time capsule of work place drudgery prior to computers!

02 “Linnea Reese” in Nashville (1975)
Robert Altman’s Best Picture nominated masterpiece Nashville has its hilarious moments but they don’t come from Lily so she must have been quite a relevation at the time. She was known solely for her comic gifts in the broad context of TV shows like Laugh-In, when she played against type for her Oscar-nominated movie debut. She’s confidently soulful as a gospel singer with a deaf son who is cheating on her husband. She nails the film’s best scene with a less-is-more minimalism as she listens to her lover (David Carradine) sing his ballad “I’m Easy” (which was nominated for Best Original Song). If you haven’t seen Nashville, drop everything, and absorb its cacophonous mosaic of the music scene during a local political election in the tumultous seventies. It’s a masterpiece. 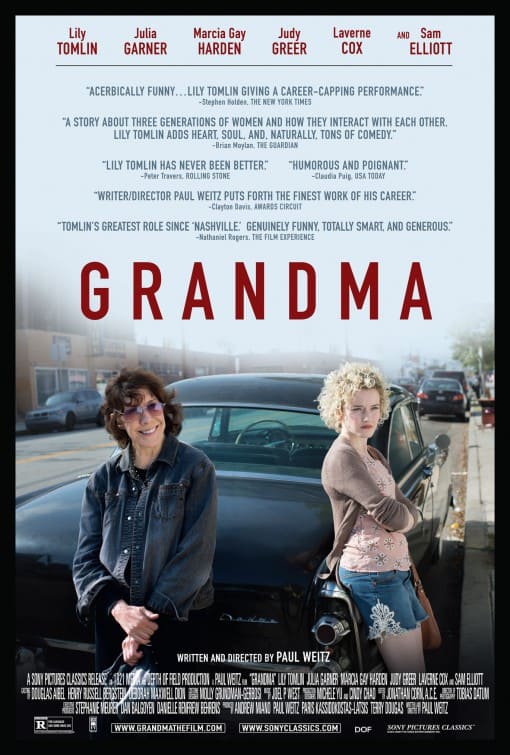 01 “Elle Reid” in Grandma (2015)
Grandma may be a slight (if highly enjoyable) movie in comparison to Nashville, but 40 years after her Oscar nominated debut, at 75 years of age, what a surprising gift to see this living legend handed such a strong headline role. And one written just for her, no less. Lily, a proud member of the LGBT community who has been with her wife Jane Wagner since the early 70s, has usually played it straight on screen, but this time the role is a bit closer to home.  She’s amazing and hilarious as a smart, bitter, eccentric lesbian feminist with no filter and intimacy issues (she’s just dumped her girlfriend played by Judy Greer as the film begins) who is still mourning the loss of her life partner years earlier when her granddaughter comes to her in desperate need of advice and money. Here’s hoping Lily’s best role since Nashville provides her with a bookend Oscar nomination, 40 long years later.

GRANDMA is playing in select cities so go see it!  Support our LGBT entertainers, especially the great ones!