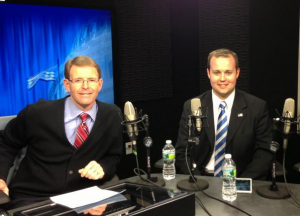 Duggar, a married father of four, served as executive director of the FRC’s lobbying arm for two years before resigning from the position in May in the wake of a molestation scandal in which he admitted to sexually abusing his younger sisters as a teenager.

“Last night we learned from online reports about allegations concerning Josh Duggar and then read his confession today.  We are grieved by Josh’s conduct and the devastating impact of his pornography addiction and marital unfaithfulness.  Our hearts hurt for his family, and all those affected by Josh’s actions. His deceitful behavior harms his family, his friends, his former coworkers, and the cause he has publicly espoused. Those of us who advocate for family values in the public square are held to a higher standard, and Josh’s failures serve as a painful reminder of the destructive effects of not living with integrity. We are praying for the family.”