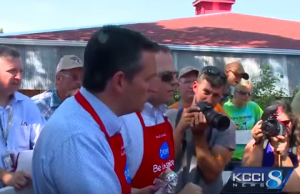 At the Iowa State Fair earlier today, 2016 GOP candidate and professional hatemonger Ted Cruz was confronted by none other than actress Ellen Page over his anti-LGBT record.

The video of the face-off is pretty much required viewing.

The exchange over religious freedom and LGBTQ rights occurred at the Pork Producers tent as Cruz grilled pork chops, a favorite stop for the presidential candidates.

“What about the question about LGBT people being fired for being gay-trans?” Page asked.

“Well, what we’re seeing right now, we’re seeing Bible-believing Christians being persecuted for living according to their faith,” Cruz said.

“You’re discriminating against LGBT people,” Page said. “Well, would you use that argument in segregation?”

In the video, Cruz mentions Dick and Betty Odgaard, the couple behind the (ineffective) campaign to place place 1,000 anti-gay billboards across the country who were recently hired onto the Cruz campaign’s Iowa leadership team.