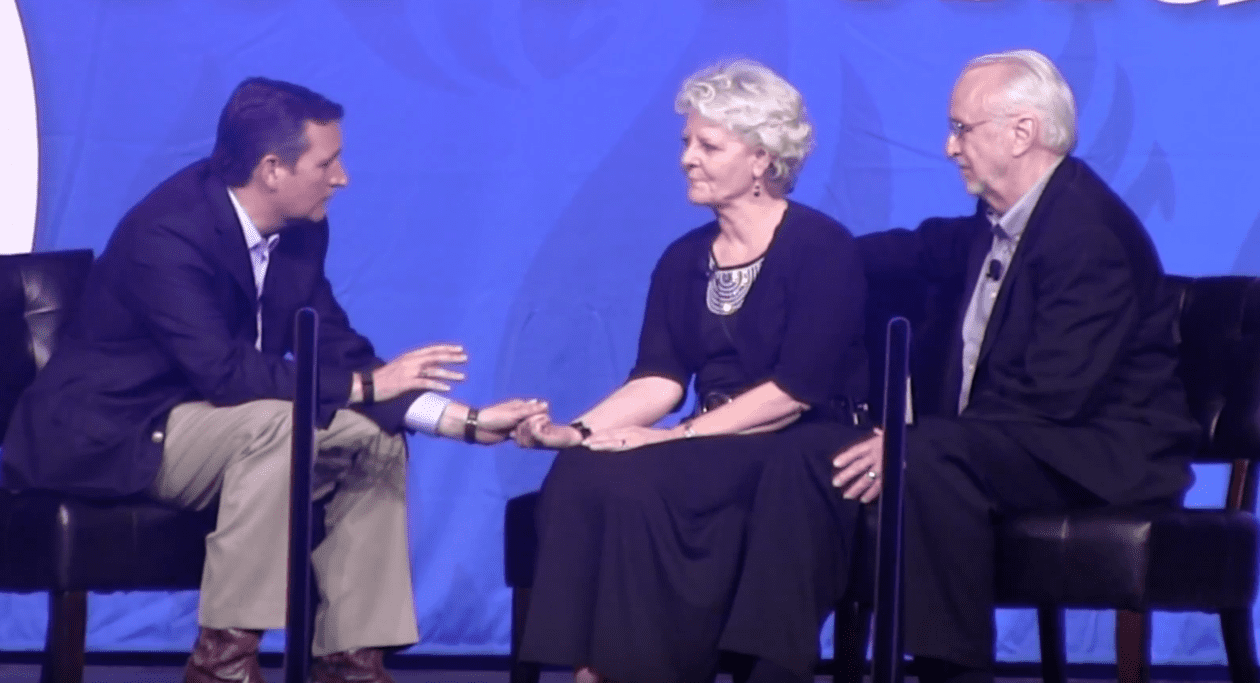 Speaking at an anti-gay rally Friday night, Ted Cruz’s Iowa campaign chairman suggested the senator was chosen by God to run for president.

Hours after his showdown over LGBT rights with lesbian actress Ellen Page at the Iowa State Fair, Cruz was joined for the rally by “heroes” who’ve been “persecuted” for their anti-gay religious beliefs, including Iowa Mennonite couple Dick and Betty Odgaard (above), Oregon bakers Aaron and Melissa Klein, and former Air Force Sgt. Phillip Monk. About 2,500 people attended Cruz’s “Rally for Religious Liberty.” 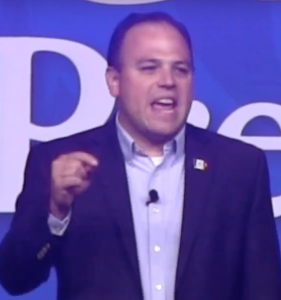 “These threats are not imagined,” Cruz said. “There is a war on faith in America today. In our lifetimes, did we ever imagine that in the land of the free and home of the brave we would be witnessing our government persecute its citizens for their faith?”

The religiosity was unabashed at Cruz’s “Rally for Religious Liberty,” an event intended to help him harness frustration among religious conservatives, a key bloc in the Iowa caucus. Cruz’s state campaign chairman, Matt Schultz (right), went so far as to portray the Texas senator as God’s top choice for president.

“We need someone who will go to Washington and throw the money-changers out,” he said, comparing Cruz to Jesus himself. “God raises special men and women to protect his people, and I believe this is one of those moments in time. … Ted Cruz is that man who God has prepared for this moment in time.”

If that’s the case, God isn’t doing a very good job of convincing Republican voters. Cruz is currently polling sixth in Iowa and even worse nationally. In fact, Cruz is no longer even ahead in his home state of Texas, where Donald Trump overtook him in a poll this week.

One of Cruz’s major problems is that his anti-Washington rhetoric is being upstaged by Trump, the quintessential political outsider. So, anti-gay bigotry disguised as “religious liberty” may be all Cruz has left. From The Washington Post:

Cruz has said that 2016 will be a “religious liberty election,” and is working to woo the religious right, which has a strong constituency here, in the early voting state of South Carolina and in the rest of the South, which is set to play a major role in the Republican nominating contest.

Here in Iowa, 57 percent of Republican caucus-goers identified as evangelical Christians, according to entrance polls. Cruz has been courting faith leaders here, dispatching his father Rafael, a pastor, to speak at events around the state and announcing Friday that he wants to recruit a pastor in each of Iowa’s 99 counties to do faith outreach. …

While Cruz will be competing for the evangelical vote with candidates including former Arkansas governor Mike Huckabee, former senator Rick Santorum and neurosurgeon Ben Carson, few have been as vociferous about the notion that religious liberty is under attack than Cruz. He brought up the issue repeatedly during a bus tour of the South last week, repeatedly promising that on his first day in office he would direct federal agencies not to meddle with people who believe they have stayed firm to their religious beliefs in the face of social change.

“Ted Cruz showed today that he is living in another era where he thinks it’s acceptable to treat LGBT people differently and allow businesses to refuse service to someone just because of who they are, or who they love,” said JoDee Winterhof, Senior Vice President of Policy of Political Affairs. “Today Ted Cruz was served an important reminder that in a country like ours that values the free market economy, businesses should serve all law-abiding customers who can afford to pay equally, including lesbian, gay, bisexual and transgender people.”

Watch Schultz’s comments and other clips from Cruz’s rally on Friday night below.

Previous Post: « Bill Maher Is Having a Field Day with the Josh Duggar Cheating Scandal: VIDEO
Next Post: Man Buns Have Officially Taken Over Disneyland: PHOTOS »