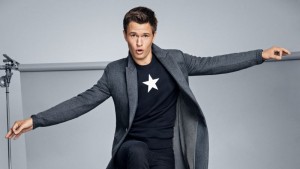 Ansel Elgort is more than just a pretty face on the silver screen, as the 21-year-old actor also happens to be a talented disc jockey. Under his electronic music moniker Alonoso, the Divergent star has just released his first single “To Life” featuring Too Many Zooz.

“To Life” (or “L’Chaim,” judging by the single artwork of a young Jewish boy participating in a hora dance) is an old-world blaster complete with deep brass squawks and pulsating pounds. It’s a club banger for bar mitzvahs as well as EDM festivals, and that’s cool.

Elgort also teased the upcoming music video for the track: