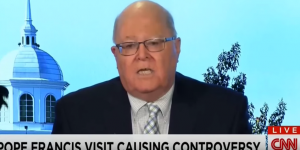 I find it astounding the president of the United States would actually show his contempt for Catholics by bringing in people like Dignity. Dignity brought in Dan Savage, the most foul mouthed, obscene anti-Catholic bigot to their convention in July…Look the Pope has already said the Vatican is speaking for him. They’re afraid these photo ops can be exploited to the extent that the Pope therefore sanctions them. It’s one thing to be welcoming and inclusive, it’s quite another to bring in people who are opposed stridently and publicly to the teachings of the Catholic Church.

DignityUSA is an organization working “for respect and justice for people of all sexual orientations, genders, and gender identities — especially gay, lesbian, bisexual, and transgender persons — in the Catholic Church and the world through education, advocacy, and support.”

“The goal here is to invite up to 15,00 people to the South Lawn of the White House, and the Ellipse, to welcome the pope to the White House. We would expect a wide variety of Americans who are enthused about the opportunity to see the pope. I think that reflects the pope’s stature and the significance of his visit, and the way he has inspired so many Americans, including a bunch of us who aren’t Catholic. So I would expect there would be a diverse crowd… to attend that ceremony. And I think the diversity of that crowd reflects the diversity of people in this country who are moved by the teaching and actions of this pope.”