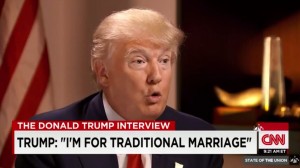 Speaking with MSNBC’s Morning Joe crew Friday, GOP frontrunner Donald Trump was asked to give his thoughts on the Kim Davis drama in Kentucky.

“I would say the simple answer is let her clerks do it. Now from what I understand she’s not letting the clerks do it either. The other simple answer is rather than going through this — because it’s really a very, very sticky situation and terrible situation — 30 miles away they have other places, they have many other places where you get licensed. And you have them actually quite nearby, that’s another alternative.”

Related, Donald Trump Asked How He’d Explain His Opposition to Gay Marriage to a Gay Kid

Trump added that he hates to see Davis in jail but the “decision’s been made, and that is the law of the land.”

.@realDonaldTrump I understand asking forgiveness from God and respecting communion is a personal decision. (2/3)

But even really rich New Yorkers should oppose jailing Christians for their religious beliefs. (3/3)