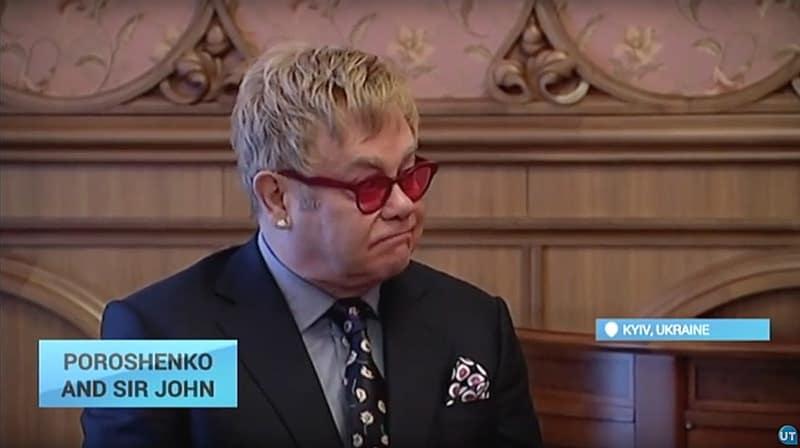 Sir Elton John, accompanied by his husband David Furnish, met with Ukrainian President Petro Poroshenko in Kiev on Saturday to lobby him on LGBT rights after speaking at the  Yalta European Strategy forum where he spoke on the same topic.

He came with a simple plea for Ukrainians to support tolerance and equal rights for all – regardless of race or sexual orientation.

Ukrainians still have much progress to make in accepting homosexuality, John said, citing the foiled attempt by 250 people to hold a gay pride parade in Kyiv in June. John noted that the location had to be kept secret and that twice as many riot-police officers were called to duty as marchers. And still, the singer noted, the gay-rights marchers were attacked.

“The march lasted all of 10 minutes,” John said in Kyiv’s Mystetskyi Arsenal. “This happened in this city weeks ago. So I am telling you we have a long way to go.”

John said that as Ukraine tries to break free from its old patterns and create a “new” nation, it should adopt the values of tolerance and respect for human rights. Not only is it the morally right stance, but John said that the economy will be more prosperous when employers embrace diversity.

John also spoke with the BBC after the meeting, telling the news outlet that he would like to meet with Russian President Vladimir Putin:

Watch a report from Ukraine Today: