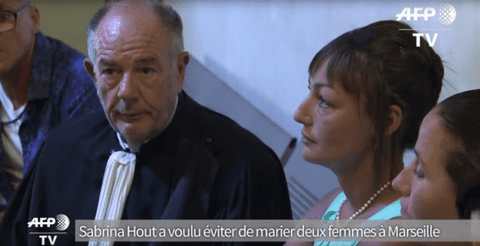 Sabrina Hout, the deputy Mayor in the southern French city of Marseille, has been sentenced to a five-month suspended prison sentence for refusing to marry a same-sex couple supposedly on the basis of her “religious convictions.”

The court ruling said the evidence against Hout was “damning”, as France 24 reports:

Three witnesses told the court that Hout, a Muslim, had referred to her “religious convictions” as a reason not to perform the marriage.

Hout had said she was not homophobic and put the error down to a “bad set of circumstances.”

“It is imperative that no citizen, irrespective of age, handicap, race, political opinion and, indeed, sexuality, has reason to doubt the neutrality of … elected officials,” [the ruling] said.

At a hearing on 1 September before the criminal court, the prosecution had requested three months of imprisonment and a 1,500 euro fine against Sabrina Hout, one of the city’s deputy mayors, for discrimination.

When the two women who wanted to marry appeared at her office in August 2014, Hout claimed she was not feeling well and had a borough council member perform the marriage instead.

However, borough council members are not authorised to perform marriages.

The marriage was later declared invalid by the city, and the couple was legally married by a district mayor in Marseille last year. […]

“I’m really sorry. I’m ashamed of what I did, if it was interpreted as homophobia,” Hout had told the court, insisting that the events were due to a “bad set of circumstances.”

Watch a report from AFP (in French) that appears to show Hout speaking with the couple at the center of the case and making peace, below: