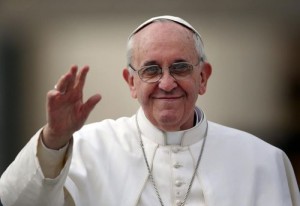 Pope Francis kicks-off his long-awaited trip to the United States next week and the Human Rights Campaign is making sure the church leader hears the plight of LGBT Catholics. Next Wednesday, the pope will pray with bishops at St. Matthew’s Cathedral in Washington D.C. and within view will be an HRC banner that reads: 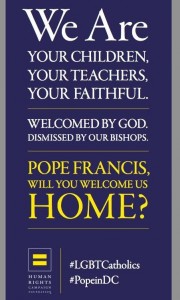 “We Are Your Children, Your Teachers, Your Faithful. Welcomed by God. Dismissed By Our Bishops. Pope Francis, Will You Welcome Us Home?”

HRC notes that members of the LGBT Catholic faith community will also be on hand to “raise their voices in welcome while urging the pontiff to embrace them as God has.”

“Many of us in the LGBT community have been heartened by Pope Francis’ compassionate words and willingness to take steps to more fully embrace people of faith long rejected by the Catholic Church,” said HRC President Chad Griffin.  “As leader of the Church, his words set a powerful example, and reveal our shared values of justice, equality, respect, and compassion.”

“But, sadly, many in our community are still being fired from their jobs at Catholic schools, and shunned by their church communities simply because of who they are,” Griffin said. “So while we join in welcoming the Pope to the United States, we will also be urging him to continue to move toward greater acceptance and embrace of members of our community who are longing to hear that their Church welcomes them– and their families–fully. We are all God’s children.”

HRC will also be highlighting the stories of LGBT educators like Margie Winters, who was fired as a teacher at a Catholic-run school for being gay, in a series of videos. Check out Winters video below:

More info on HRC’s efforts during Pope Francis’ visit can be found here.