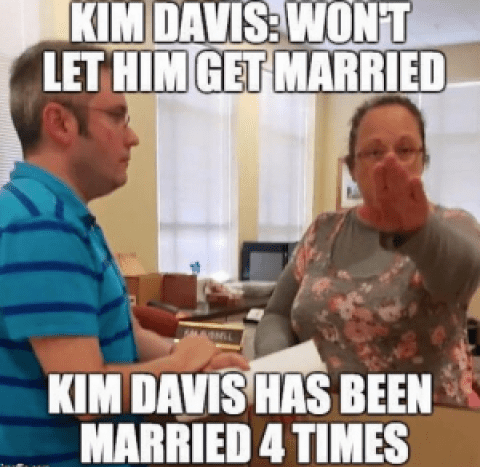 Kim Davis’ fourth husband, Joe Davis, is standing by his woman and her defiance of the law, saying that Kim is “standing for God” by opposing same-sex marriage.

Mr. Davis was spotted arriving at the Rowan County courthouse, where his wife works and denies marriage licenses to same-sex couples, to “check on his wife”, according to the AP. Rather disturbingly, Mr. Davis seemed to suggest that he would not be opposed to using firearms to defend his wife:

Joe Davis says his wife has received death threats, and the couple changed their phone number. But he says he’s not afraid and believes in the Second Amendment.

He said: “I’m an old redneck hillbilly, that’s all I’ve got to say. Don’t come knocking on my door.”

On Monday, the Supreme Court declined to intervene, leaving Kim Davis no legal grounds to refuse to grant licenses. A district judge could now hold her in contempt, which can carry steep fines or jail time.

Joe Davis compared his wife to the biblical figures Paul and Silas, sent to prison and rescued by God.

He pointed to the gay rights protesters gathered on the courthouse lawn and said: “They want us to accept their beliefs and their ways. But they won’t accept our beliefs and our ways.”

Previous Post: « READ: Gay Couples Ask Federal Judge to Hold Kim Davis in Contempt
Next Post: Here’s Everything You Need To Know About The Next Big Fight For LGBT Rights »