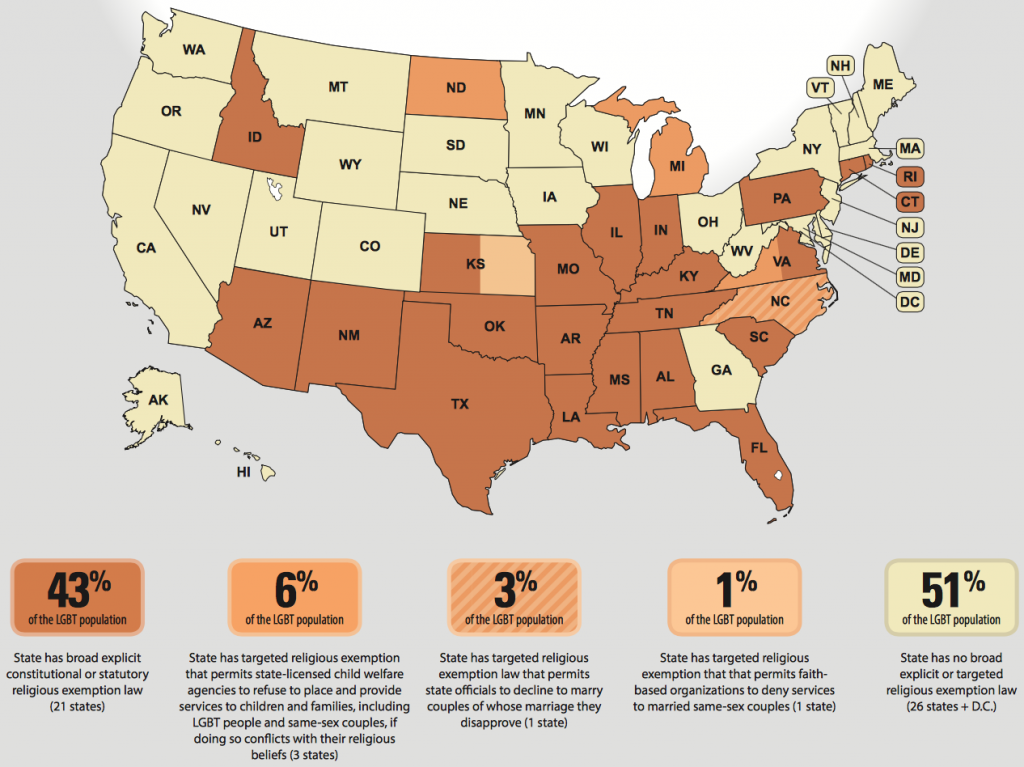 With marriage equality out of the way (minus a few exceptions), it’s no secret that religious exemption laws represent one of the next major battlegrounds in the struggle for LGBT equality.

Which means that if you haven’t already, this might be a good time to bone up on which states have these laws, how they work and why they pose such a grave threat to gay rights going forward.

The Movement Advancement Project (MAP) released a report today that serves as a good primer on the subject, and as you can see in the map reproduced above, the news is not so good.

The report shows that nearly half of LGBT Americans live in one of 21 states with broad religious exemption laws, and with new proposals likely this fall, those numbers may soon grow. Already, lawmakers in 17 states have introduced religious exemption proposals since the beginning of the year, largely in response to the spread of marriage equality.

“While recently passed religious exemption legislation may not explicitly mention the LGBT community being targeted for discrimination, the timing and explicitly anti-LGBT rhetoric used to justify these exemptions makes it clear that religious exemptions are being used as a vehicle to harm LGBT individuals and their families,” said MAP Executive Director Ineke Mushovic. …

Some states’ laws have made it much easier to claim a religious burden. For example, Alabama’s religious exemption amendment does not require the burden to be substantial, opening the door for exemptions from laws with which someone may merely disagree. In Kansas, a substantial burden can be merely ‘likely,’ meaning a person does not need to show that their religious exercise has actually been burdened, just that it might be burdened.
“Definitions this broad can severely hamper law enforcement if someone objects to a law on religious grounds,” Mushovic said. “Laws of this kind pave the way for numerous costly lawsuits and opens a can of worms that may take decades to sort out.”
In addition to the states with broad religious exemptions laws, some have passed more specific versions:
• Michigan, North Dakota and Virginia permit state-licensed child welfare agencies to refuse to place and provide services to children and families, including LGBT people and same-sex couples, if doing so conflicts with their religious beliefs.
• North Carolina has targeted religious exemption law that permits state officials to decline to marry couples of whose marriage they disapprove.
• Kansas has targeted religious exemption that that permits faith-based organizations to deny services to married same-sex couples.
These laws are especially dangerous in light of the U.S. Supreme Court’s ruling in the Hobby Lobby case, which determined that some private corporations can claim exemptions under the federal Religious Freedom Restoration Act. Although the decision applies only to the federal RFRA, it’s likely to affect how states interpret their own religious exemption laws. From MAP:

The original federal RFRA may have been passed with good intentions, but the Supreme Court’s interpretation of the law in Hobby Lobby—alongside states’ ever-increasing roster of religious exemptions, both broad and targeted—raise serious concerns about how these vague exemptions are being used to harm others, interfere with law enforcement, and undermine the rule of law.