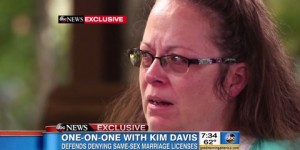 Yesterday, we showed you Good Morning America’s interview with Kim Davis in which the Kentucky clerk claimed she had “friends that are gay and lesbians” and that she’d already denied one of her alleged gay friends a marriage license.

“I can’t put my name on a license that doesn’t represent what God ordained marriage to be,” Davis declared.

The search is now on for these mythical gay friends, as The Daily Beast has reached out to Davis’ lawyers, co-workers, neighbors, and even her first husband.

“I don’t even know who they are,” said a Liberty Counsel spokeswoman. “I don’t think she would lie. Someone who goes to jail for her conscience wouldn’t lie about that.”

None of the other interviewees were able to provide any names of gay friends. Dwain Wallace, Davis’s first husband, said she didn’t have gay friends when they were married.

The Kentucky Equality Federation also joined in the search, posting the following on its Facebook page yesterday:

Does Kim Davis have gay friends whom she has denied marriage licenses as she claimed to ABC’s Good Morning America? Are you one of her gay “best friends” that she claims to have? If you are, the media would like to speak to you to verify this claim because Kentucky Equality Federation simply doesn’t believe anything that comes out of this woman’s mouth. If you can verify her claim, please email us here on our Official Facebook Page and we will pass the reporters information to you. Our position has been made very clear: http://community.kyequality.org by Federation officials.

The Federation went on to humorously note:

We have received over 60 emails asking for places to purchase “Kim Davis Halloween Costumes.” Multiple vendors will have her “hair” back in-stock soon and you can purchase a blue-jean dress at any K-Mart or Walmart.

Previous Post: « Ariana Grande Explains Why She’s a ‘Raging Lunatic’ Over ‘Dumb as F–k’ Homophobes
Next Post: This Apologetic Dog and His Handsome Owner Make An Irresistible Couple: WATCH »