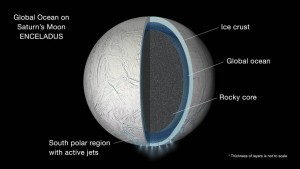 Planning a sea-faring vacation to escape from the rest of the world? Don’t discount Saturn’s moon Enceladus, as NASA has just released new research that indicates a global ocean lies underneath its icy surface.

Using research from the Cassini-Huygens spacecraft that is scheduled to make a flyby of Enceladus on October 28, NASA was able to detect a slight wobble on the moon that researchers say can only be accounted for by a underground ocean.

“This was a hard problem that required years of observations, and calculations involving a diverse collection of disciplines, but we are confident we finally got it right,” said Peter Thomas, a Cassini imaging team member at Cornell University and lead author of the paper.

Researchers added that the mechanisms that might have prevented Enceladus’ ocean from freezing remain a mystery but suggested it could be due to Saturn’s gravity.

“This is a major step beyond what we understood about this moon before, and it demonstrates the kind of deep-dive discoveries we can make with long-lived orbiter missions to other planets,” said co-author Carolyn Porco, Cassini imaging team lead at the Space Science Institute (SSI) in Boulder, Colorado. “Cassini has been exemplary in this regard.”