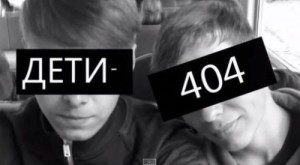 A Russian media watchdog group has banned five online LGBT youth groups on the grounds they violated the country’s ban on “propaganda of nontraditional sexual relations among minors.”

Included in the ban was Deti-404, the LGBT teenage counseling organization that was targeted last month by a Russian court.

Roskomnadzor said on September 21 that the groups — all of which are registered on Russia’s VKontakte social network — had been banned by a district court in the southwestern city of Barnaul.

Watch a trailer for the documentary below.

Previous Post: « LGBT Catholics #TellThePope of Their Faith in Powerful Video Series Ahead of Papal Visit: WATCH
Next Post: What To Watch On TV This Week: ‘Scream Queens’ Premieres, ‘Empire’ Returns »