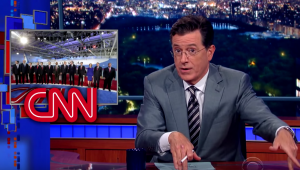 On Jeb Bush joining Vine while the debate was taking place:

“Vine of course hosts videos of only six seconds. Or slightly longer than Scott Walker was allowed to speak last night.”

“That explains a lot. He isn’t low energy, he’s baked.”

Want more Stephen Colbert in your news feed? Click HERE and LIKE our page on Facebook. Select “get notifications” in pulldown menu to receive our headlines in your feed.