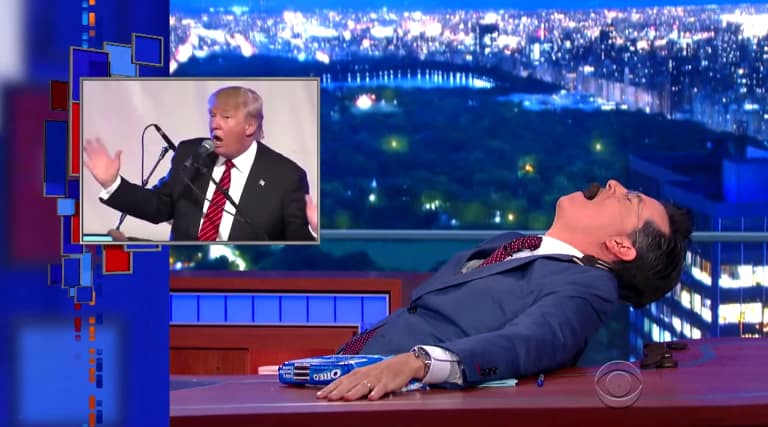 Stephen Colbert made his debut on The Late Show last night, taking over for famed former host Dave Letterman. Needless to say, since Stephen left The Colbert Report and started prepping for his new gig, there’s been plenty of news baiting his interest.

For instance, Donald Trump. Colbert couldn’t resist skewering the “Oompa-loompa-Merican” and the media’s obsession with the Republican front-runner. He compared discussing Trump’s unlikely candidacy with bingeing on Oreos.

“Colbert started the interview by asking the candidate why he was running, the kind of softball question that allowed Bush to go into campaign themes of fixing Washington (a “basket case,” Bush said) and out-of-control federal spending. Bush even got a chance to repeat his line that he was known in Florida as “Veto Corleone,” for the number of spending bills he killed.

Colbert’s most provocative question had to do with how he would differ from his brother, an opening for all sorts of anecdotes. But again, Bush stuck to his own themes, saying that Dubya perhaps let the GOP controlled Congress get too out of control on spending.”

Check out other clips from Colbert’s debut, below: