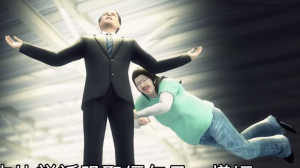 The wacky team behind the Taiwanese Animators is back to tackle last night’s GOP presidential debate, including Mike Huckabee’s obsession with Kim Davis.

Huckabee, you’ll recall, had this to say about the lawless, anti-gay county clerk:

Previous Post: « Tom Hardy on Reporter’s Question About His Sexuality: ‘I Know Who I Am’
Next Post: South America Has Become a Safe Haven for the Catholic Church’s Alleged Child Molesters »