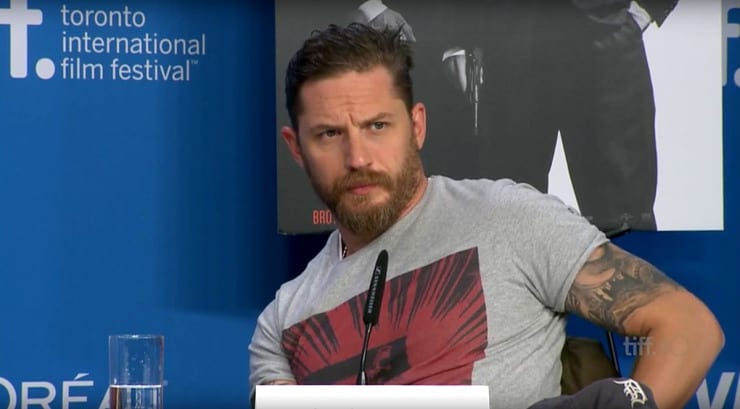 Earlier this week, we showed you a rather uncomfortable exchange between actor Tom Hardy and Graham Coleman from Canada’s Daily Xtra at a Toronto International Film Festival panel for Legend, an upcoming film in which Hardy plays twin gangsters, one of whom is gay.

Coleman, referencing an interview Hardy did back in 2008 where he admitted he’d had sex with men, asked the actor whether he found it hard for celebrities to talk to the media about their sexuality.

Hardy was none too pleased with the line of questioning and terminated the exchange prematurely with a terse “thank you.”

Hardy addressed the exchange in an interview published today in The Daily Beast:

I think everybody is entitled to the right to privacy. There should be elegant ways to approach any topic, and there’s a time and place to approach anything and have a good, common sense conversation about anything. I do think that there’s a responsibility for people to own the way that they speak publicly. This doesn’t stop us from being human beings; some things are private. I’m under no obligation to share anything to do with my family, my children, my sexuality—that’s nobody’s business but my own. And I don’t see how that can have anything to do with what I do as an actor, and it’s my own business. If you knew me as a friend, then sure, we’d talk about anything. But that was a public forum, and for someone to inelegantly ask a question that seemed designed entirely to provoke a reaction, and start a topic of debate… It’s important destigmatizing sexuality and gender inequality in the workplace, but to put a man on the spot in a room full of people designed purely for a salacious reaction? To be quite frank, it’s rude. If he’d have said that to me in the street, I’d have said the same thing back: “I’m sorry, who the f–k are you?”

What he had to talk about was actually interesting, but how he did it was so inelegant. And I appreciate that I could probably have more grace as a human being, but I’m just a bloke. I’m just a man. And I’m just a man doing a job. I’m not a role model for anyone, and you’re asking me something about my private life in a room full of people. I don’t want to discuss my private life with you. I don’t know you! Why would I share that with a billion people? Also, if you felt it was so important for people to feel confident to talk about their sexuality, why would you put somebody on the spot in a room full of people and decide that was the time for them to open up about their sexual ambiguity? There’s also nothing ambiguous about my sexuality, anyway. I know who I am. But what does that have to do with you? And why am I a part of something now that, however legitimate, I haven’t offered my services for? It’s not about what he and his publication stands for, none of that is offensive, and on the contrary, it’s very admirable, and an important issue. But how I was asked was incredibly inelegant, and I just thought it was disrespectful and counterproductive to what he stands for.

Check out all our news on Tom Hardy HERE.