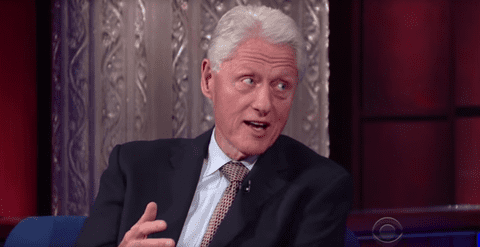 Former President Bill Clinton was on The Late Show with Stephen Colbert last night offering his take on why seemingly dark horse candidates Donald Trump and Bernie Sanders have had such tremendous success thus far this election cycle.

“A lot of people believe that the Republicans have been rewarded for — they reward the people that go furthest to the right, so the Democrats would be even more effective if they moved further to the left.”

As for Trump, President Clinton attributed his rise to being a “master brander” who tapped into a desire among Republican voters for a brusque machismo approach to ‘political correctness.’ Said Clinton, paraphrasing Trump’s approach,

“‘I run things, and I build things, and you need somebody who will go in there and fix it, and if they don’t fix it I’ll get them out of the way.’ It may have a short half-life his campaign — I can’t tell yet. But he is a master brander and there is a macho appeal to saying, ‘I’m just sick of nothing happening, I make things happen, vote for me.'”

Colbert made sure to ask Clinton if he was the one responsible for getting Trump to run (as had been whispered in the cloistered chambers of the vast right wing conspiracy) . While Clinton insisted he can’t take the credit, Colbert quipped, “You never said, Iowa is beautiful this time of year?”

Watch the “Secretary of explainin’ stuff” break down the 2016 race so far:

Previous Post: « Arizona Community Split on LGBT Anti-Discrimination Proposal: VIDEO
Next Post: WATCH: ‘This Is How You Troll Horrible’ Homophobic Protestors at Pride »