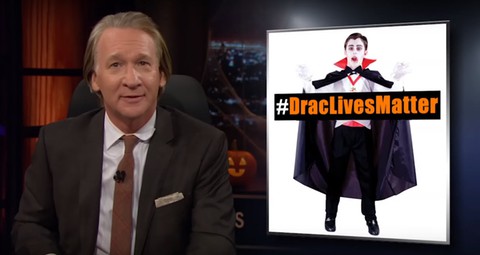 “New rule: the PC police have to stop lecturing us on which Halloween costumes are inappropriate or insensitive and leave Halloween to the people it was created for–middle-aged gay men.”

Maher added, “There has to be one day where going too far isn’t just OK it’s celebrated. Halloween is supposed to be politically incorrect. That’s why it’s called ‘trick or treat’ not ‘placate and coddle.'” In Maher’s eyes, the umbrage over politically incorrect costumes epitomizes “lazy liberalism” at its worst: when scolding “become[s] a substitute for actually doing something.” Maher also argues that this brand of political correctness ends up feeding Republican campaigns (cough, Donald Trump, cough) that capitalize on backlash to liberal PC culture.

Watch Maher take the PC police to task, below: