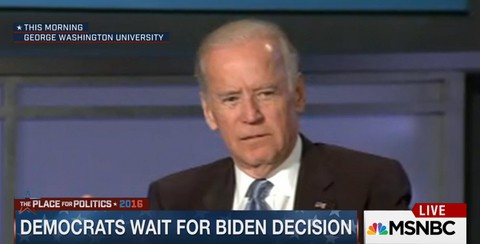 On Tuesday, Vice President Joe Biden jabbed Hillary Clinton over her comments about the Republican Party during last week’s Democratic Debate. Asked to name some of the enemies she was most proud to have made during her career, Clinton named “the Republicans” among others including Iran and the health insurance lobby.

Biden’s remarks come as speculation over his potential 2016 presidential run has reached a fever pitch.

For the second time this week, Biden also sought to portray himself  as a pragmatist who’s capable of working with Republicans, drawing a subtle contrast with party front-runner Clinton.

“I don’t think my chief enemy is the Republican Party,” Biden said during a panel discussion at an event honoring former Vice President Walter Mondale in Washington. By contrast, Clinton named  “the Republicans” as one of her greatest enemies when asked at the Oct. 13 Democratic candidate debate.”