THE WALK  begins in mid air with a jaunty circus-like score from composer Alan Silvestri accompanying the clouds. Our birds-eye view is quickly revealed as just above Manhattan, perched on no less a tourist icon than the Statue of Liberty. That we’re looking at something purely presentational is abundantly clear as crinkly-eyed Joseph Gordon-Levitt makes his first appearance, smiling and speaking directly to the camera. And he speaks with a cartoon French accent to boot. (To be fair to JGL, many real French people sound like cartoon people when they speak English. This is meant as a compliment because who doesn’t love cartoons and/or French accents?). What’s more, at least to these only super-marginally trained ears (I watch a lot of French movies and I took French in high school –that’s the extent of it!) JGL’s actual French sounds impeccable in his subtitled scenes with French co-stars.

Is there anything he can’t do? Joseph Gordon-Levitt’s adorableness can be so distracting!

Let’s get back on topic. In this opening scene The Walk announces itself as something entirely removed from our mundane reality… that’s an unexpected choice considering that we’re at the kick off of Fall Movie Season and we’ve firmly entered the realm of “Based on a True Story”. 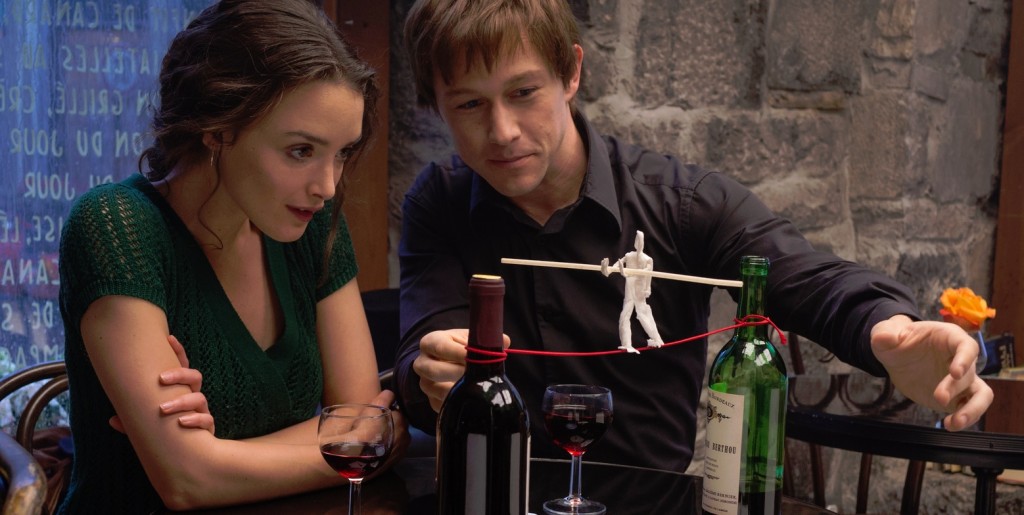 The fantastical “storytelling” approach is unexpected but entirely welcome. Once you acclimate, that is.

At first this ringmaster-like intro, with JGL promoting his own circus act as legendary high wire man Philippe Petit, is quite jarring. For the story of The Walk is already real-world familiar. It’s been told to both box office and Oscar winning success in the documentary Man on Wire (2008) which recounted Petit’s rise from a Parisian wire walker to a man who made headlines all over the world with his illegal stealth magic trick: suspending a steel wire between the newly erected Twin Towers (just before they opened to the public) and walking back and forth across them.

The Walk is not at all what you might expect from a recounting of this famous happening. Director Robert Zemeckis (Back to the Future, Flight, What Lies Beneath) treats the story more like a tall tale or adventure film than a docudrama from its first frames to its last. The usual dramatic intensity and psychological profiling of true stories is shooed away at every opportunity to focus on a colorful comic dash through Petit’s life to collect his funny band of “accomplices” before they head to NYC to achieve the impossible. About the only thing the movie makes room for as a result is fun surface-level pleasures like amusing ensemble acting and broad physical scenes of “danger” in the rehearsals and trial runs… except not really because Petit will obviously live to walk between the Towers!

When The Walk kicked off the New York Film Festival last weeked (on the way to its right-now IMAX release — the film opens in normal theaters in one week but if you’re interested at all, IMAX is the way to go) reports of people vomiting in the rest room from dizziness were abundant. I had assumed that its eye-catching imagery was too green-screen movie-magic fake to really affect people beyond turning them wide eyed like children but I assumed wrong. (I am not without phobias, but fear of heights isn’t remotely one of them.) Viewers with vertigo might only risk this (if at all) in 2D in normal theaters… unless their therapist is really stressing exposure therapy in which case, obey.

While Man on Wire, a better if far less visceral film, was forced to show you Philippe Petit’s 1970s walk across the Twin Towers through still photography, archival news reports, and talking head memories, Zemeckis is an old fashioned movie magician. He’s after recreation through fantasy. He’s always been a “spectacle” director, obsessed with technical challenges (see Death Becomes Her’s twisted divas or Forrest Gump‘s archival cameos, and so on…) so he clearly relishes the finale most of all. In fact the towers walk is more like the final third of the movie than a true climax. That’s where all the passion goes and it’s by far the grandest part of an otherwise just okay movie. Zemeckis’s joy at staging the event is infectious and he takes the 3D IMAX cameras out there in mid air to show you the historic walk in all its dizzying, windy, high-altitude, and bloody footed insanity.

You know that feeling when you remove 3D glasses to rub your eyes for a second and, the spell suddenly broken, you feel entirely silly for both wearing stupid ugly movie glasses and glancing at a boozy colorful double image without them? That’s the feeling of The Walk. By the time the credits rolled, I realized I had not been watching a true story drama but two semi-adorable fantasy films fused into one.

One of them is a silly children’s film about circus performers and that feeling you get when you first fall in love with the magical skycrapers of the big city. The other is a nostalgic fable for weary adults about a more innocent time in America’s history via the recreation of a long gone New York skyline. They’re both just tricks, but like any worthy circus act, they work their dumb magic beautifully. The “oohs” and “aahs” and chills from the crowd arrive right on schedule and if you miss the World Trade Center at all, that eye rubbing beneath your glasses might just be from tears. 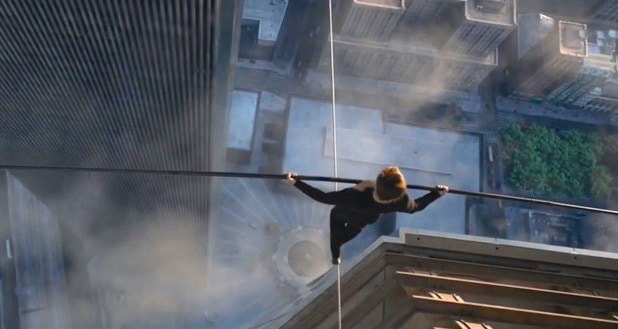