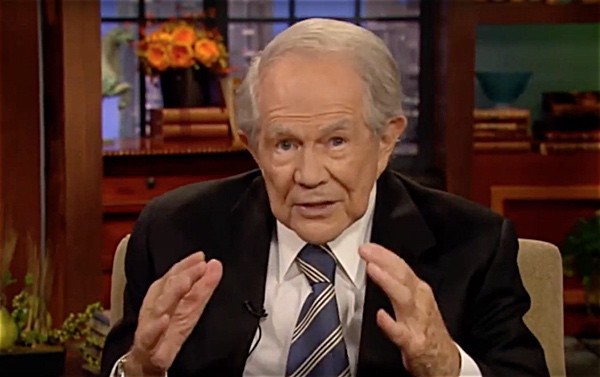 Pat Robertson told his 700 Club viewers today that gay marriage is not legal no matter what the Supreme Court says.

A viewer of Robertson’s show was very angry about a “blasphemous” letter he had seen in a local paper claiming that Romans 13:1-4 supports the SCOTUS Obergefell ruling because it says that “government is from God, therefore everyone must submit to the government. Even Christians!”

“In the legal system, party A sues party B over marriage, ‘I want to get married to them,’ and the court says, ‘Okay, you can get married.’ That doesn’t mean that I’ve got to get married to homosexuals, it doesn’t mean that you have to nor does it mean that it’s the law of the land. Congress didn’t pass any law. Your state legislature didn’t pass a law. So you’re not under anything, it’s a decision of the court having to do with a couple of people. Now they would like to make it bigger than that but, in terms of the Constitution, it isn’t.”

Previous Post: « Leah Remini: ‘Being Critical of Tom Cruise Is Being Critical of Scientology’ – VIDEO
Next Post: Houston Mayor Annise Parker Puts Her Money Where Her Mouth Is On Equal Rights Ordinance – VIDEO »