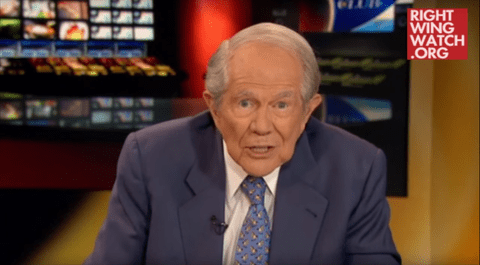 No doubt referencing Kim Davis as well as other so-called defenders of ‘religious liberty’, 700 Club host and noted bigot Pat Robertson today said that gays are on a vindictive mission to go after anyone “who disagrees with them.”

“What they want to do is persecute anybody who disagrees with them. They want those people bankrupted. They want those people put in jail. Is that what the left wants? The answer is ‘absolutely.’ It is vindictive now. We’re not talking about having rights from the ‘poor oppressed gays’. We’re talking about taking away the freedoms of everybody who disagree with them. Do we want that in America? We’ve got to make a stand for these people. They’re being pilloried in the press, their being laughed at in the press because the press is in league with the gay rights people and they somehow think this is a civil rights issue. They better be careful with what they’re doing because they’re taking away the rights of everybody!”

Watch Robertson foam at the mouth, below:

Previous Post: « Is The Glass Half Full or Half Empty? ASAPScience Has The Answer: VIDEO
Next Post: Nick Jonas Says He’s Not Intentionally Queerbaiting You »