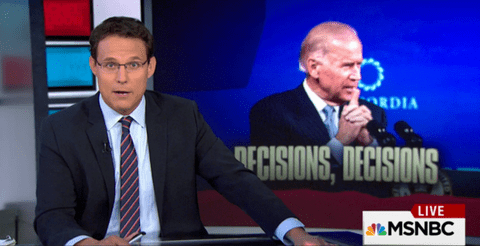 Subbing for Rachel Maddow last night on MSNBC, Steve Kornacki stepped in and dug into Politico’s “explosive” claim that Vice President Joe Biden was the one who leaked the story of his son’s dying wish that he run for President to Maureen Dowd of The New York Times. The Politico called Biden’s contacting Dowd a “calculating move” that was tantamount to “[placing] an ad in The New York Times.”

The Maureen Down column in question, “What Would Beau Do?” dates back to August of this year and suggests Beau wanted “Biden values”–not Clinton values–in The White House. Examining the voracity of Politico’s claims, Kornacki characterized the column as “remarkably unsourced.”

“It was unusual. Not only did it contain these intimate details of Beau Biden’s last interactions with his father, some of the most personal moments in Joe Biden’s life, but one passage was even written from inside Joe Biden’s head.”

Still, Kornacki also pointed out that the divulging of such intimate details to Dowd, if it did in fact come from Biden, could very well have occurred off the cuff in a less calculating manner than the Politico piece suggests. Even so, the report is “a chilling reminder”, Kornacki says, that should Biden decide to run, “politics are going to be as nasty as ever, and nothing, not even his son’s death will be off limits.”