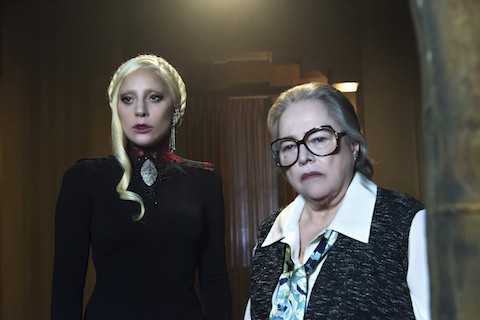 You know, I was just thinking how this show needed some more characters to introduce this season. Apparently, an already over-stuffed cast just isn’t enough for American Horror Story: Hotel. Now they’ve got their actors playing dual roles.

The good news is that AHS is working with some incredibly strong actors, so even the more ridiculous characters can be a hoot to watch. Did we really need Finn Wittrock to play silent-film star Rudolph Valentino? Definitely not. Was it fun to watch? Sure!

Still, even Wittrock’s performance was only a fraction as fun as any time Evan Peters in on screen. He’s been relegated to sad-eyed puppies for the first four seasons of this show, and it’s been a delight to see him let loose with the mustachioed James Patrick March. Even Lady Gaga rose to the occasion during her extended flashbacks in last night’s episode. On a cast full of seasoned thespians, Gaga finally had a chance to show some range beyond icy detachment, lust and greed.

Let’s unpack our latest developments in the SPOILER-filled recap, below. 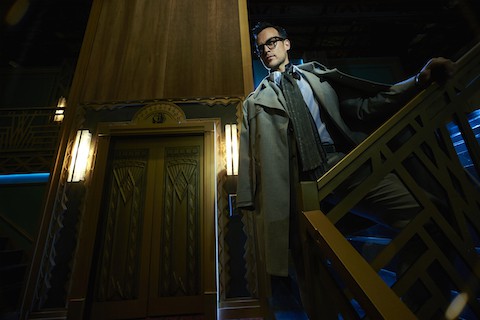 Will Drake (Cheyenne Jackson) is ready to settle down at the Cortez, so he’s doing a little remodeling. No, the Property Brothers aren’t there (which is a little surprising, given that they’re totally Ryan Murphy’s type), but there are two construction workers who take down a thick steel wall at Will’s request. What lies behind it is an entire wing of the hotel that appears to have been sealed off for ages.

Despite the smell of death, the two construction workers press on further into darkness, only to be attacked and killed by two seriously malnourished vampire(ish) people.

Iris (Kathy Bates) alerts Gaga to the situation (and delivers the best line of the night/season, which I think is best presented without context: “I couldn’t pick my butthole out of a lineup”). Iris is surprised to see the Countess so shaken. BUT WHY? 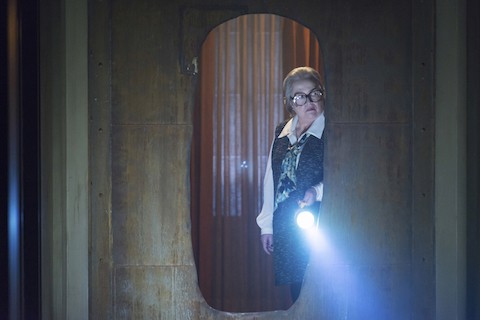 Later, Gaga receives news at a party that Valentino is dead. She’s stricken with grief and climbs onto the ledge of a window at the Hotel Cortez, ready to jump. She’s saved by March (an ironic twist, the consummate killer saving a life) and the two marry. She claims to have never loved him, but she was drawn to his darkness. Clearly, it spoke to a darkness in her. When she catches him draining the blood of a hobo, she’s more disappointed that he didn’t pick a richer victim — or let her watch.

She also becomes a sort of celebrity/urban legend as a woman in all black who visits Valentino’s grave. On one such occasion, Natacha and Valentino appear to her and tell her that they faked Valentino’s death. He actually met F.W. Murnau (the real-life director of Nosferatu). Turns out Nosferatu was something of a documentary, and he has the ancient blood virus. He gives it to Valentino; Valentino gives it to Natacha; and now they give it to Gaga. 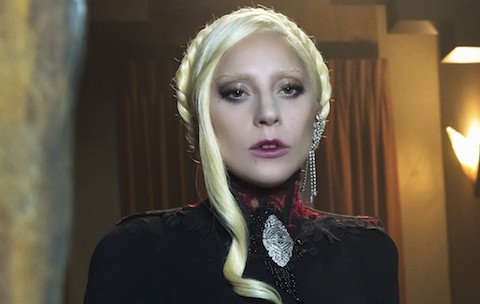 March catches wind of their threeway romance and is none too please. Unbeknownst to the Countess, she seals them up forever in the Hotel, never to be released until Drake had the wall demolished.

And boy are these two STARVING! They follow up the amuse bouche of those two construction workers by feasting on Marcy the realtor (Christine Estabrook). After that, they devour three dudes staying across the hall. Then they’re feeling back to their old selves and head out to the streets.

Meanwhile, Gaga is ready to sit down for her monthly meal. You know, just your usual romantic dinner between a lusty vampire and her serial killing ghost husband. She tells him she’s marrying Will Drake and doesn’t love him. He tells her he sealed her silent film-era lovers in the walls of his hotel for nearly a century. Typical married life, you know?

The real question now is: What’s going to happen now that they’re out? We’ve already got a roving band of bloodthirsty vampire children on the loose. 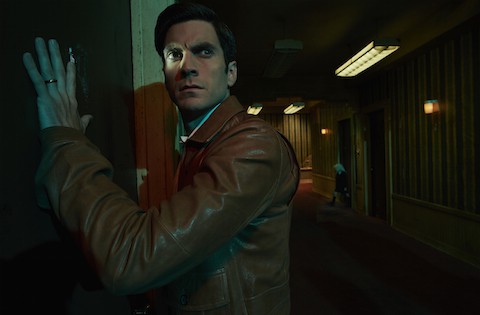 Elsewhere, John Lowe (Wes Bentley) is taking positive steps in his recovery by checking into a mental hospital. Just kidding! He’s faking a mental breakdown (or at least fudging the details of his actual breakdown) to get him locked up with the cops’ suspect in the Ten Commandments Killer case.

Once inside, he knocks out the one security guard who is stationed outside and makes his way into the suspect’s cell. Inside is a weird little girl. She had a really doozy of a dad who was both a pedophile and the kind of guy who intentionally leaves his daughter in a hot car. Luckily, she was saved by Gaga and clearly given the virus.

This is where it becomes clear that Lowe is actually a terrible detective. Does none of this warrant further probing? Isn’t it weird that there’s a kid in here? That she’s not hungry … for food? That even his wife’s skin is cold to the touch? For a detective, he sure is incurious about being surrounded by vampires and ghosts. Just saying.

Anyway, the little girl tells him that she’s been helping the killer, but she wants to stop now. She’s done. She wants Lowe to kill him. The whole conversation is stilted and strange, and it is all feeling more and more like John is actually the killer. He’s killing people in his blackouts and then hunting himself by day. It would explain his invitation to March’s little murder party.

Lowe frees the girl from the hospital, but once they get outside she tells him she likes him and runs in front of a truck.

Yikes. There goes that lead.

So, that brings us to about the halfway point in the season. Let’s see if we can name all the major plot points in the air. By my estimation, we’ve got Alex (Chloe Sevigny) working as a governess and hiding from John; Ramona (Angela Bassett), Donovan (Matt Bomer) and Iris (Kathy Bates) seeking revenge on Gaga; Gaga seeking revenge on March; Rudolph freaking Valentino stalking the streets of Los Angeles out for blood; a gang of undead murderous children on the loose; the Ten Commandments Killer terrorizing the town; Gaga marrying Will Drake; plus there are undead like Naomi Campbell’ character, the Danish girls and Miss Evers roaming the halls, as well as the fabulous (and heartbroken) Liz Taylor (Denis O’Hare). Am I missing anything? Some of these will run together, but there are still a lot of balls in the air.

What do you think will happen to the Countess? Is John the Ten Commandments Killer? Share your theories in the comments.