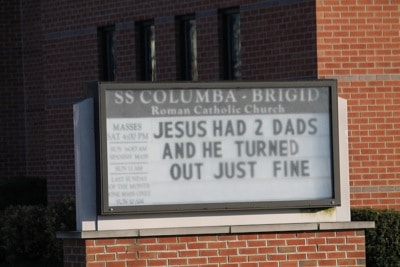 A Catholic church in Buffalo, New York has taken down a sign many interpreted as supportive of same-sex marriage but that the church’s pastor says was not intended to be pro-gay.

The sign which was posted last week read, “Jesus had 2 dads and he turned out just fine.” It was removed within 2 days of being posted. Signs posted by the church usually are left up for 2 weeks.

Rev. Roy Herberger of Saints Columba-Brigid Roman Catholic Church said he decided to go with that particular message as a show of support for the children in his parish who come from non-nuclear homes and often have stepparents. He says he came up with the idea for the “Jesus had 2 dad signs” when Googling “funny church signs.”

“I only had one purpose,” the pastor explains to Yahoo Parenting. “After 48 years in the church, I see so many kids with stepparents, or even in single-family homes or being raised by grandparents, who feel that they’re not as good as other kids who have a nuclear mother-and-father family. I’ve seen what that does sometimes when they’re comparing themselves to that nuclear family and I wanted to say, ‘Hang in there. You’re good. Things will work out for you.’ I wanted to provide support and understanding for kids in that situation.”

The church leader adds, “I’m not trying to cause problems. I had no trouble taking the sign down.”

The Bishop for the local diocese instructed the pastor to take down the sign as soon as he learned of its existence:

“As soon as I learned of this sign, I took immediate action to have it removed,” Bishop Richard J. Malone of the Catholic Diocese of Buffalo said in a statement shared with Yahoo Parenting about the message put up last week.

Malone instructed Herberger to remove the lettering on Tuesday following “phone calls from around the world, from callers protesting the contents of the sign,” a diocese spokesperson told the Buffalo News. “The pastor of SS Columba-Brigid Church told me that the “2 Dads” were meant to refer to a child who has both a father and stepfather,” Malone wrote in his statement. “There are several children in his parish who have both a father and stepfather. However, given the potential for the meaning of this message to be misunderstood and even perceived in a heretical way, it was immediately removed.”

Many upset Catholics have called for Herberger’s resignation and say they don’t accept his explanation. Catholic Family News responded: “With respect, it seems hard to imagine anyone in our time not being aware of what the ‘2 dads’ term can imply, especially since the pro-homosexual book Heather Has 2 Mommies has been around since 1989.”

Back in 2013, an Anglican Church in Niagra Falls, Ontario posted the same message on its church sign, though their decision was intentionally pro-gay.

Watch a news report on the latest controversy below: