Destiny and Power: The American Odyssey of George Herbert Walker Bush, a new biography of the 41st president, clarifies views on same-sex marriage that have “mellowed” since he left office. It also contains some criticisms of Dick Cheney and Donald Rumsfeld, the New York Times reports: 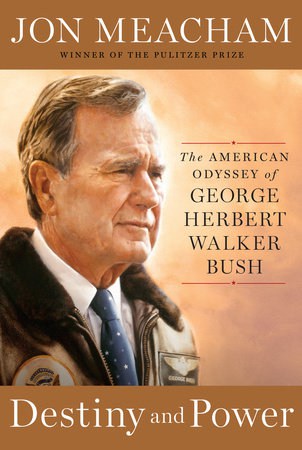 While gearing up for his 1988 campaign, Mr. Bush said in his audio diary that Americans “don’t want homosexual marriages codified.”

In retirement, he attended a same-sex marriage and in September of this year sent Mr. Meacham a note to clarify his position.

“Personally, I still believe in traditional marriage,” Mr. Bush wrote. “But people should be able to do what they want to do, without discrimination. People have a right to be happy. I guess you could say I have mellowed.”

Perhaps more interestingly, #41 goes after Dick Cheney and Donald Rumsfeld in the tome:

“He had his own empire there and marched to his own drummer,” Mr. Bush said [of his son’s administration]. “It just showed me that you cannot do it that way. The president should not have that worry.”

He speculated that Mr. Cheney was influenced by his wife, Lynne, and his daughter Liz, both strong conservatives. “I’ve concluded that Lynne Cheney is a lot of the eminence grise here – iron-ass, tough as nails, driving,” he said.

And he also calls Rumsfeld “arrogant”.

“I think he served the president badly,” Mr. Bush said. “I don’t like what he did, and I think it hurt the president having his iron-ass view of everything. I’ve never been that close to him anyway. There’s a lack of humility, a lack of seeing what the other guy thinks. He’s more kick ass and take names, take numbers. I think he paid a price for that.”

He added, “Rumsfeld was an arrogant fellow and self-assured, swagger.”