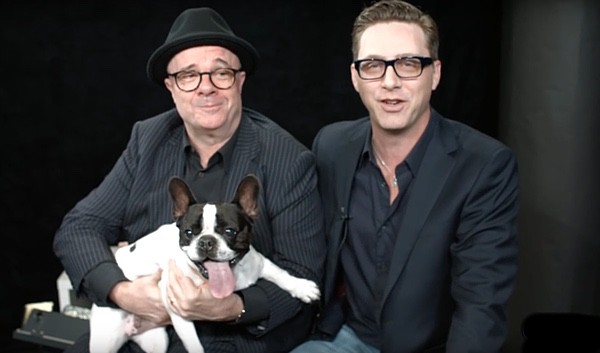 Nathan Lane married his partner of 18 years Devlin Elliott in a ceremony on Tuesday at City Hall in New York, according to People magazine.

A rep for the couple told People: “Everyone is extremely happy.”

The couple is seen above with their French bulldog Mabel, about whom they collaborated on a book called Naughty Mabel.

Said Lane of the book:

“I mentioned to Devlin how hilariously overprivileged our Mabel was becoming, and jokingly suggested we should write a children’s book called ‘Mabel of the Hamptons.’ Devlin thought this was a great idea and actually sat down and wrote a first draft. I realized he meant business and so we dove in together, and many drafts later Naughty Mabel was born. It has been such a blast writing this book. Having seen the brilliant work of Dan Krall, we are more excited than ever to give Mabel a voice, or at least the voice we hear in our heads. We hope you enjoy and love her as much as we do.”

The couple recently sat down with USA Today to discuss the dog, and the collaboration.

Previous Post: « Adele Got a Nose Job to Try and Punk a Bunch of Adele Impersonators: WATCH
Next Post: A Queer Love Triangle Plays Out in Bret Easton Ellis’s Novel ‘The Rules of Attraction’ – LISTEN »