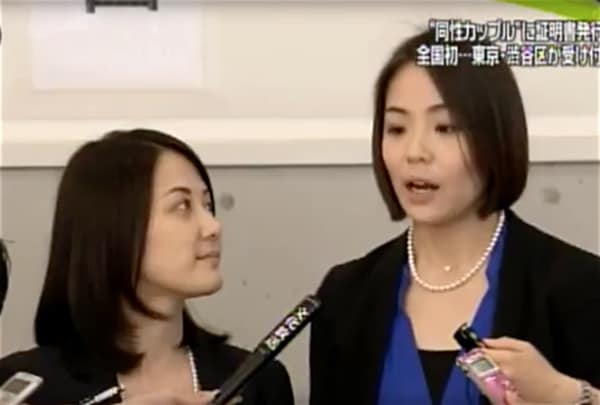 Hiroko Masuhara and Koyuki Higashi were the first couple to apply and received their certificate on Thursday, The Guardian reports:

Shibuya ward on Thursday began issuing same-sex partnerships to couples aged 20 or over, who are required to sign a notary document confirming they were in a loving relationship based on trust, according to Kyodo News.

While Japan does not place the partnerships on a legal par with heterosexual marriages, officials said the move was designed to support same-sex couples, who say they are routinely discriminated against when looking for accommodation or visiting partners in hospital…

…“I want many people to know that same-sex couples are around you,” Higashi, an actor, said outside the ward office, where she and Masuhara, an entrepreneur, were congratulated by the mayor, Ken Hasebe. “As a first step, I hope this will spread across Japan.”

Local news covered Masuhara and Higashi as they went to apply:

Previous Post: « Elton John: The Queen Could Change Anti-Gay Laws in the Commonwealth ‘With One Wave of Her Hand’ – WATCH
Next Post: Men in Jetpacks Fly Beside Massive Airbus A380 in Spectacular Video: WATCH »