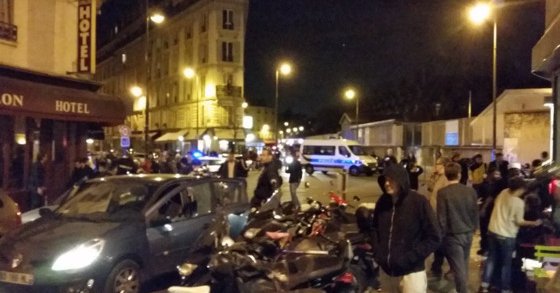 More than 120 people have been killed in an unprecedented set of coordinated terror attacks in Paris. French police said there were eight attackers. Seven died in suicide bombings, and one was killed by gunfire. President Hollande blamed the Islamic State (ISIS) which took credit for the attack on social media. Hollande declared three days of national mourning.

The following post appears in chronological order and was created as the attacks went down on Friday the 13th:

At least thirty people have reportedly been killed in a series of seemingly coordinated attacks in Paris.

Another recent report indicates the death count may have risen to 40.

The first known attack was a shooting in central Paris according to BFMTV that happened Friday night at a trendy restaurant in the 10th arrondissement.

BFMTV also reports that there are two hostage situations underway. One reportedly at a theater.

Police say one or possibly two explosion took place at a soccer stadium in Paris, bringing the total of suspected coordinated attacks to at least three, possibly four depending on the number of hostage situations.

Several people are reportedly dead after an attacker opened fire on a restaurant in central Paris on Friday night, as part of what witnesses say is a wave of violence still unfolding across the city.

French media say the shooter fired numerous times upon patrons dining at the restaurant, Le Petit Cambodge, with a Kalashnikov rifle and that he or she is still at large.

Witnesses have also reported hearing an explosion near the Stade de France, the country’s national stadium, which is hosting a soccer game between France and Germany, as well as a shooting at a night club.

French President Francois Hollande was reportedly present at the stadium to watch a soccer match between Germany and France and has been evacuated. 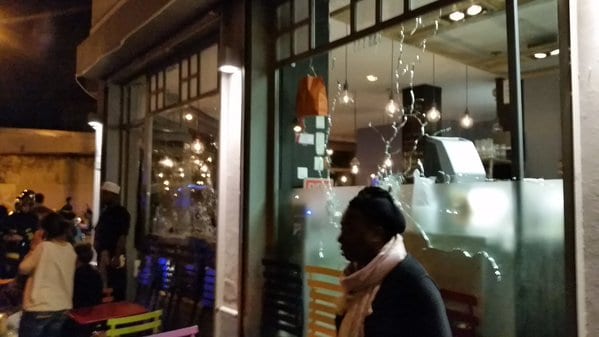 UPDATE #3: The below map shows the location of the three attacks in Paris.

UPDATE #4: People in the Stade de France are reportedly not leaving due to the ongoing terror situation gripping the French capital. Reports from Sky News indicate that people at the stadium have been urged to calmly leave the stadium.

100s of people have run onto the pitch at the Stade de France, frightened to leave, footage via @v_menichini pic.twitter.com/BHt6G1rY0w

Within the Stade de France, worried fans flood the pitch as the news of the Paris attacks continues to pour in https://t.co/1izrcM9EM8

Video after the explosion at the stadium has also emerged.

The explosion could be heard as the soccer game was underway.

UPDATE #5: CNN reports a shootout is underway on the rooftop of the Bataclan concert hall where hostages are said to be held. 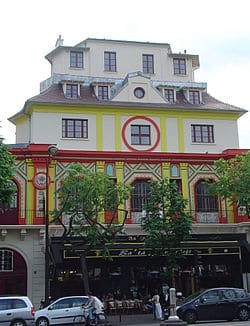 UPDATE #6: American rock band Eagles of Death Metal were playing at the Bataclan (right) on Friday night when the attacks took place.

No one has claimed responsibility for the attacks on Paris.

ISIS does however already have a hashtag on Twitter celebrating these attacks.

UPDATE #7: The hostage count at the Bataclan theater is now said to be somewhere between 60 and 100.

US officials say the attacks were clearly coordinated.

BREAKING.This is what we know: 35 dead, 100 hostages taken at a concert venue. Various drive by shootings. Explosions at a #Paris stadium.

I am shocked by events in Paris tonight. Our thoughts and prayers are with the French people. We will do whatever we can to help.

UPDATE #8: BFMTV now reports 60 people have died. The AP has confirmed 100 hostages have been taken at the Bataclan theater. It is unknown at this point how many Americans have been involved in the attack.

UPDATE #9: Another shooting has reportedly taken place in Paris at a shopping mall.

UPDATE #11: CNN France reports that attacks have also taken place at the Louvre and at the Centre Pompidou.

More info on the Centre Pompidou via Wikipedia:

It houses the Bibliothèque publique d’information (Public Information Library), a vast public library, theMusée National d’Art Moderne, which is the largest museum for modern art in Europe, and IRCAM, a centre for music and acoustic research.

French President Francois Hollande has called the attacks terrorist attacks. France has also taken the unprecedented action of closing its borders in response.

France declares state of emergency and closes its borders after Paris attacks https://t.co/ElKn2RYiNq

UPDATE #12: One of the explosions detonated at the Stade de France was a suicide attack. German Chanellor Angela Merkel has also spoken out on the attacks, saying she was “absolutely shocked” to hear the news.

#BREAKING One of explosions near Paris stadium was suicide attack: several sources

UPDATE #13: Video of police outside the hostage scene at the Bataclan theater has been posted by the AP.

Police meanwhile confirm that there was a second suicide attack near the national stadium in Paris.

UPDATE #14: A French eyewitness and radio reporter says there were 10 “horrific” minutes of shooting inside the Bataclan. He also reports that the terrorists were killing individuals in the theater one by one. Hostages are reportedly still being held in the theater.

Ten "horrific" minutes of shooting according to this witness inside the #Paris theater: https://t.co/3u7gegPiin https://t.co/dJDyLNR1fu

UPDATE #15: Gunfire and possible explosions have been heard outside the Bataclan theater as the hostage standoff continues.

Police have also reportedly stormed the Bataclan theater where hostages are being held.

One eyewitness also says that one of the attackers at the concert hall shouted “Allahu akbar” before shooting into the crowd assembled.

UPDATE #17: Watch a clip of French President Francois Hollande’s speech in response to the terrorist attacks.

UPDATE #18: The police takeover of the Bataclan theater has ended and the two attackers have reportedly been killed.

The AP reports that the attackers threw explosives at the hostages leaving “carnage” in their wake.

BREAKING: Police: Assault on Paris concert hall with hostages is over, at least 2 attackers killed. 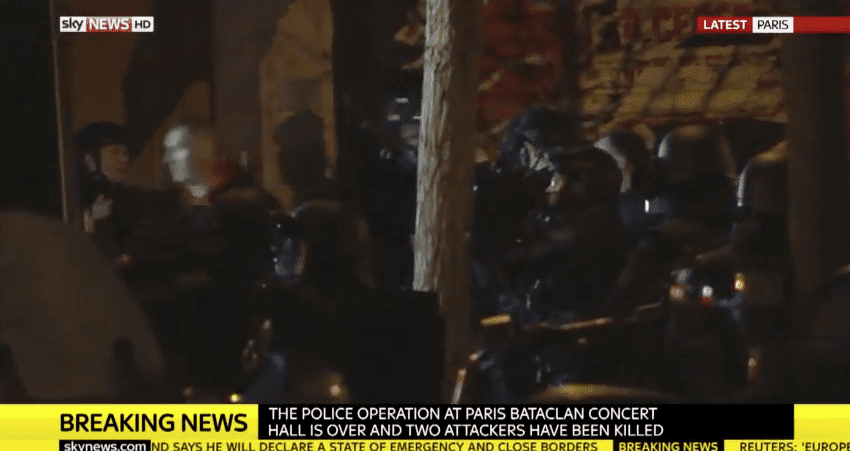 UPDATE #19: As many as 100 people killed in the Bataclan theater alone according to news reports.

UPDATE #20: No word yet on the status of the American band that was playing at the Bataclan in Paris.

UPDATE #21: CNN is reporting that the death toll from the Bataclan theater attack alone is at 118.

AFP meanwhile reports that three attackers were killed by police at that theater.

French President Francois Hollande has called the attacks an “act of war” in a televised address to the French people. Hollande blamed the Islamic State (ISIS), who claimed credit for the atrocities.