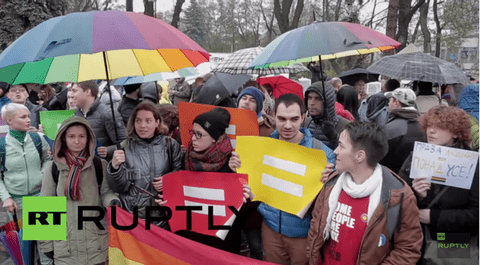 Ukraine’s Parliament has passed a bill that will provide non-discrimination protections for LGBT people, specifically in the area of employment.

Enacting protections for LGBT people in employment was a step the EU required Ukraine to take in order to allow its citizens to travel to EU member nations without visas.

Lawmakers had twice rejected the nondiscrimination bill earlier this month over opposition to the LGBT protections. This was the last of a suite of legislation required by the EU — which also included controversial laws against corruption — for Ukraine to qualify for a program allowing its citizens to travel to the EU without needing visas.

The bill only passed after six rounds of voting on Thursday. After the bill narrowly failed on the the fifth attempt, Speaker Volodymyr Groysman called a recess to lobby for the vote, the Kyiv Post reported, telling lawmakers, “Seven votes stand between us and a visa-free regime.” […]

Yuri Lutsenko, leader of a junior party in the governing coalition, had urged lawmakers to vote for the bill, saying, “it’s better to have a gay parade on Khreschatyk” — Kiev’s central thoroughfare — “than Russian tanks in the center of the Ukrainian capital. I believe that if we’re going to Europe, we should recognize the accepted rules in the European community,” reported Korrespondent.

In the lead up to the vote on the bill, LGBT rights activists had come out to protest the proposed removal of LGBT protections from the new law.

The speaker of parliament assured deputies that the law would not threaten “family values”, saying: “I hear some fake information which says that there may be same-sex marriages in Ukraine. God forbid, this will ever happen. We will never support this.”

In response to the vote, Ukrainian president Petro Poroshenko tweeted: “Ukraine is breaking free from the shackles of discrimination from the Soviet past. Meanwhile, family values remain inviolable.”

“The vote was not just about visa liberalisation, it could be the start of a new chapter of engagement on the rights of LGBTI people in Ukraine. Now, the work of the Ukrainian government enters a critical phase; they have an obligation to ensure that the Code is implemented in its entirety.”

Watch a news report from AFP and video of pro-LGBT protests in Ukraine, below:

Previous Post: « Gordon Klingenschmitt Thinks Hurricane Gordon Was a Sign of Support From God: VIDEO
Next Post: More Than 120 Killed in Coordinated Terrorist Attacks in Paris »