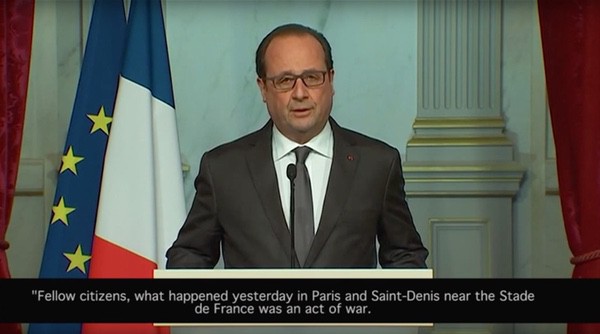 French President François Hollande spoke to the nation on Saturday in a televised address, calling the attacks on Paris “an act of war” saying the country “has to take appropriate steps” to combat the attacks “against the values we uphold throughout the world, against who we are, a free country, which speaks to the whole planet.”

Watch his statement, with translation:

At least 127 people have been killed in the unprecedented set of coordinated terror attacks. French police said there were eight attackers. Seven died in suicide bombings, and one was killed by gunfire.

See our coverage of the attacks HERE.

The Islamic State (ISIS) has claimed responsibility for the attacks:

Calling the attack “blessed,” an audio statement released online in Arabic and French said that ISIS “soldiers” targeted the “capital of prostitution and obscenity.”

The statement said eight attackers were involved and claimed the attack was the “first of the storm and a warning to those who wish to learn.”

Eight brothers carrying explosive belts and guns targeted areas in the heart of the French capital that were specifically chosen in advance: the Stade de France during a match against Germany which that imbecile François Hollande was attending; the Bataclan where hundreds of idolaters were together in a party of perversity as well as other targets in the 10th, 11th and 18th arrondissement

France and those who follow its path must know that they remain the principal targets of the Islamic State.

It went on to say that the attacks were a reaction to airstrikes by France and insults to the prophet Muhammad:

…having dared insult our prophet, having bragged about fighting Islam in France and striking Muslims in the Caliphate with their planes, which have not helped them in any way in the ill-smelling streets of Paris.

This attack is just the start of a storm and a warning for those who wish to draw lessons.

A Syrian passport was found on the body of one of the attackers.