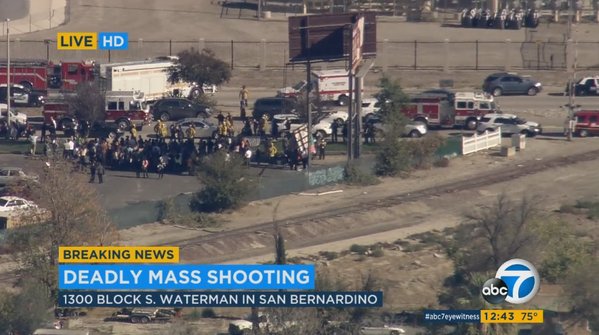 In the wake of the mass shooting in San Bernardino, California today that has left at least 14 people dead and many more injured, Republican presidential hopefuls took to Twitter to offer their solution to gun violence in America: prayers.

None of the Republican candidates indicated that the deadly shooting was emblematic of a larger problem with mass shootings, let alone one that should be curbed by stricter gun laws. Instead all they could muster the strength to do was to pray for victims and first responders.

Vox points out that there have been “at least 1,042 mass shootings, with shooters killing at least 1,312 people and wounding 3,764 more” since the 2012 mass shooting at Sandy Hook Elementary School in Newtown, Connecticut. A map created by Mass Shooting Tracker details where those shootings have taken place over the past three years.

Read the Republicans’ responses to this latest mass shooting, below.

Our prayers are with the victims, their families, and the first responders in San Bernardino who willingly go into harm’s way to save others

My thoughts and prayers are with the shooting victims and their families in San Bernardino.

Marco Rubio — No response on Twitter as of posting.

Praying for the victims, their families & the San Bernardino first responders in the wake of this tragic shooting.

My thoughts & prayers go out to those impacted by the shooting in San Bernardino, especially the first responders. -John

Praying for all those victimized by the shootings in San Bernardino, California today.

Carly Fiorina — No response on Twitter as of posting. Fiorina is from California.

Praying for those impacted by the shooting in California today.

Praying for the victims and first responders in #SanBernardino for a quick resolution.

Thoughts & prayers are with #SanBernardino

My thoughts and prayers are with the victims, families, and brave first responders during this unspeakable tragedy.

Rick Santorum — No response on Twitter as of posting.

I refuse to accept this as normal. We must take action to stop gun violence now. -H https://t.co/SkKglwQycb

Mass shootings are becoming an almost-everyday occurrence in this country. This sickening and senseless gun violence must stop.

Horrifying news out of #SanBernardino. Enough is enough: it's time to stand up to the @NRA and enact meaningful gun safety laws

Rick Santorum weighed in. As of 9:21 AM PST on December 3, Carly Fiorina and Marco Rubio had yet to address the shooting on Twitter.

Our thoughts and prayers are with the victims, their loved ones and all those impacted by today's tragedy in California #SanBernadino