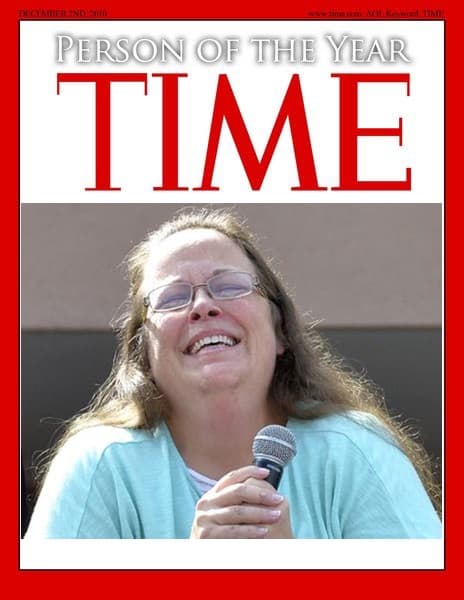 Davis is among those nominated by TIME Magazine for the annual recognition.

The Liberty Counsel website declares, “Who more than Kim Davis has influenced the news in the past year?  Kim Davis inspired a nation and the world to fight for religious liberty when she chose a prison cell rather than sacrificing her conscience.”

As Right Wing Watch reports, Staver sent out an email to supporters comparing Davis to figures like Dr. Martin Luther King, Jr. and insisting she adhered to the law:

Kim Davis became the first Christian in America jailed as a result of the Supreme Court decision legalizing same-sex “marriage.”

She joins a long list of people who were imprisoned for their conscience. People who today we admire like Rev. Dr. Martin Luther King, Jr, Jan Huss, John Bunyan, Dietrich Bonhoeffer, and others like them. Each had their own cause, but they all shared the same resolve not to violate their consciences.

Kim adhered to Kentucky law while standing for her First Amendment right to religious liberty and freedom of conscience. Liberty Counsel represented Kim throughout her ordeal.

According to the magazine, TIME editors will choose a winner with the announcement on December 9. But leading to the selection, they are asking readers to “have their say,” in a face-off poll. 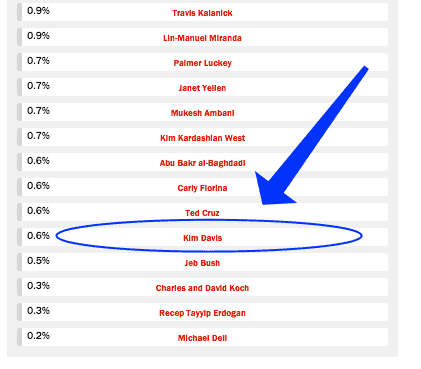