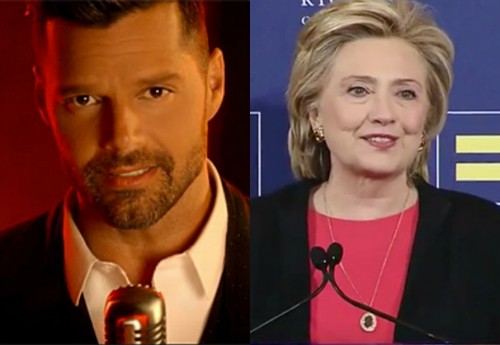 Ricky Martin has endorsed Hillary Clinton for president and launched a new LGBT group for the democratic frontrunner called “LGBT for Hillary.”

Martin announced his support for Clinton in an email sent out on Saturday, encouraging people to support Clinton and donate to her campaign.

“Growing up in the U.S. territory of Puerto Rico, I never dreamed that I would one day be a proud, out gay father of two beautiful little boys, in a country where marriage equality was the law of the land. Now, that’s just an average day — that’s what real progress is,” Martin wrote.

“Hillary knows this, and she’s not going to stop fighting. But in order to protect and build on the progress we’ve made, we need to win this election.”

Martin said supporters can join the LGBT initiative with a donation of at least $1 toward Clinton’s campaign.

Martin also shared his support for Hillary on Twitter, writing, “Proud to support @HillaryClinton, a Latina at heart. Text RICKY to 47246 to join us. ¡Pa´lante! #WEPA #Hillary2016.”