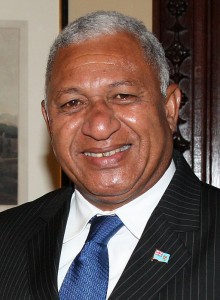 Fiji’s Prime Minister says that same-sex marriage is “rubbish” and that LGBT people in Fiji who want to get married should move to Iceland and stay there.

Frank Bainimarama was responding to comments made by Shamima Ali, the head of the Fiji Women’s Crisis Centre, on a news programme where she said Fiji should consider allowing same-sex marriage.

But in today’s Fiji Sun, Mr Bainimarama is quoted as saying that will not happen in his or Ms Ali’s lifetime, saying “Fiji does not need that rubbish.”

He says that if a woman wants to marry another woman, “they should go and have it done in Iceland and stay and live there.”

Ali called Bainimarama’s comments, “a totally regressive statement towards an LGBT community that struggles with discrimination.”