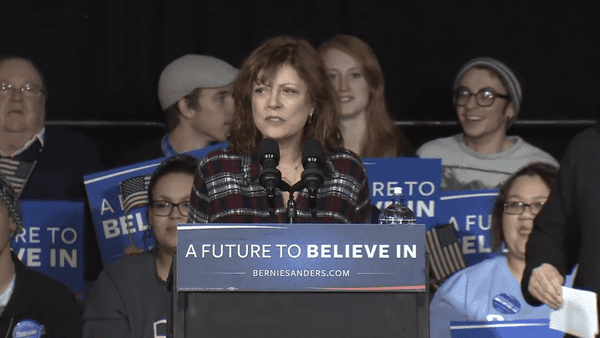 Sarandon reiterated Sanders’ narrative that he is fighting against “the establishment”, both Democratic and otherwise.

In introducing Sanders, Sarandon compared the Vermont senator’s presidential bid to that of Barack Obama in 2008. “Here we are again facing the machine,” Sarandon said.

Making a thinly-veiled reference to Clinton’s record on gay rights, Sarandon said, “It’s one thing to be for gay rights and gay marriage once everybody else is for it. That’s not difficult.”

Speaking with The Daily Mail, Sarandon suggested that Clinton is a “Johnny-come-lately” on gay marriage:

‘Yeah, she was,’ the movie star said after DailyMail.com asked if that was a reasonable interpretation of her rally remarks. ‘There’s a number of issues where she has come around but she very clearly equivocated or was not there in the beginning.

‘She was not, and that’s a matter of record, and yes she has come around,’ Sarandon said, ‘but my point is, it’s great that she came around, but wouldn’t it be great to be a leader instead of a follower, especially if you’re going to hold the highest office in the land?’

Watch Sarandon on the stump, below.