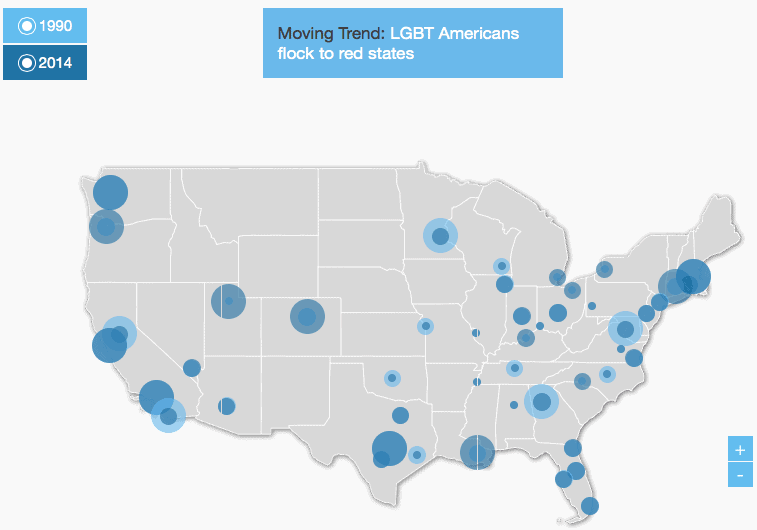 LGBT people are increasingly moving to traditionally red states where they lack protections against discrimination and are under attack from anti-gay lawmakers, according to an analysis of data from the U.S. Census Bureau and Gallup.

Of the 20 US cities that saw increases in their rankings for percentage of LGBT residents from 1993 to 2014, 11 were in traditionally red states including Virginia, Kentucky, Louisiana and Texas, according to ConsumerAffairs.com.

Salt Lake City saw the biggest increase in the size of its LGBT community, moving from 39th place in 1993 to 7th in 2014 (the most recent available data), ConsumerAffairs reports.

This trend can largely be attributed to increased LGBT acceptance nationwide, which means that people no longer feel compelled to move to queer meccas on the East and West coasts. However, the trend also means that more LGBT people are living in states where they can legally be fired, evicted or denied services based on their sexual orientation and gender identity.

The Human Rights Campaign reported last month that 111 million people live in states where LGBT people lack clear state-level protections against discrimination in the workplace. And this week, HRC noted that the number of anti-LGBT bills in state legislatures across the US had surpassed 180 — by far the most in history. Needless to say, the vast majority of those bills are in the same traditionally red states where LGBT people are moving.