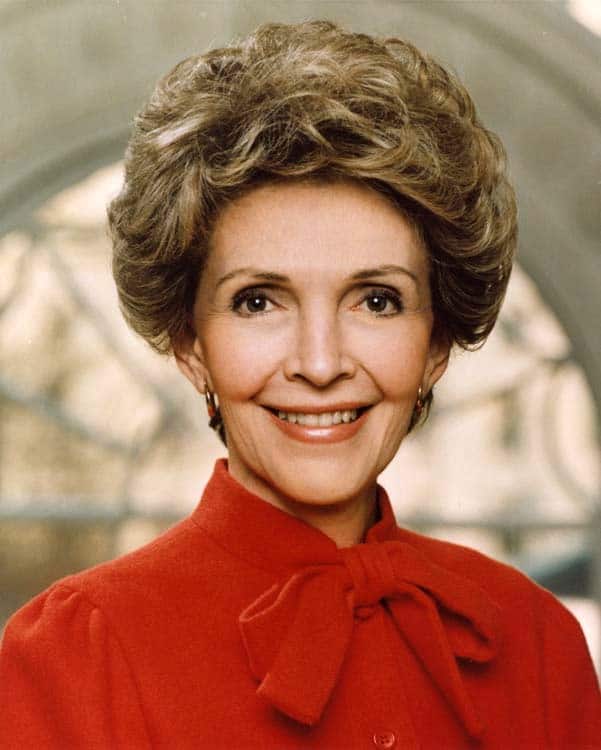 The cause was congestive heart failure, according to Reagan spokesperson Joanne Drake. Reagan died at her home in Los Angeles.

The former first lady will perhaps be best remembered for her loyalty to her husband. She became fiercely protective of him after a 1981 assassination attempt, and later stood by him as Alzheimer’s disease overtook him in his last years.

In a 1998 Vanity Fair article, she vocalized this loyalty: “When I say my life began with Ronnie, well, it’s true. It did,” she said.

During her White House years, she sponsored a major drug prevention crusade aimed at children and young adults. She toured the U.S. and other nations as part of her “Just Say No” campaign, traveling almost 250,000 miles.

As the first lady from 1981 to 1989, Reagan endured criticism for bringing high fashion and a lavish lifestyle to the White House in a time of recession. Some critics called her “Queen Nancy.”

Mrs. Reagan also stood by as her husband stayed silent during the AIDS crisis. The President waited years before mentioning it publicly, impeding government action as thousands and thousands died.

Rock Hudson died of AIDS-related complications in 1985, a year after he is said to have been diagnosed as being HIV positive. In the year between his diagnosis and subsequent death Hudson largely kept his status and deteriorating health hidden from the public while he sought out experimental treatments abroad. According to a lengthy BuzzFeed piece, Hudson’s attempts to maintain his health in France were actively impeded by then First Lady Nancy Reagan.

Hudson had been receiving experimental treatments under the care of Dominique Dormant, a French army doctor, since 1984 at a time when funding for HIV/AIDS research in the U.S. was virtually nonexistent. As Hudson’s health took a turn for the worse in 1985, however, the actor found himself unable to gain access to a French military hospital, as the doctor was fighting to keep him alive.

Hudson’s publicist, Olson, sent a desperate telegram to the Reagan White House pleading for help with the transfer. According to the Buzzfeed report, First Lady Nancy Reagan turned down the request.

In recent years, Reagan daughter Patti Davis has discussed her mother’s evolving position with regard to gay rights.

In a 2013 interview with Michelangelo Signorile on his SiriusXM radio show, Davis said that Nancy Reagan supported marriage equality.

“She does,” Davis said in response to the question. “I’m hesitant to speak for anyone else, and she’s not comfortable going out in the public eye and getting in the firing line of anything. So, you know, I want to be cautious about speaking on someone else’s behalf. But let me put it this way: I think if she had disagreed with what I said publicly about my father she would have said something publicly.” Davis chuckled and added, “Let’s just put it that way. That’s the most sort of politically correct way I can answer that question.”