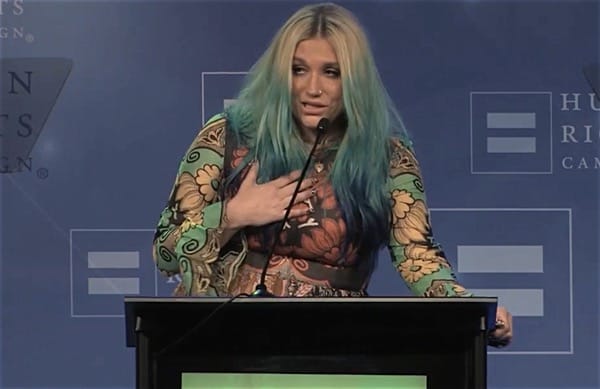 Kesha accepted a Visibility Award from the Human Rights Campaign at a Nashville Equality Dinner over the weekend, and got choked up during an emotional speech during which she acknowledged the legal battle she has been undergoing in trying to be freed from her contract with Dr. Luke, who she claims sexually assaulted her.

“As many of you know I am going through some personal things that have been really intense and hard lately and I just want to say thank you for the support I have received.”

“My message today is don’t be afraid to speak up against any injustice you experience. Don’t let people scare or shame you into changing the things about you that make you unique….It’s really hard to have confidence in yourself, and love yourself, when the world criticizes you for being yourself. And obviously there are so many other people who have had it so much harder than me. I’ve met many members of the LGBT community, and some very very close friends who have come close to taking their own lives because of the abuse they’ve had to deal with. And that is heartbreaking. I don’t want to live in a world where we treat each other like that…That’s why my message has always been about yourself, and we really have to love each other and support each other. Believe me, when I sing these words, I’m talking to myself as much as I’m talking to anyone else.”