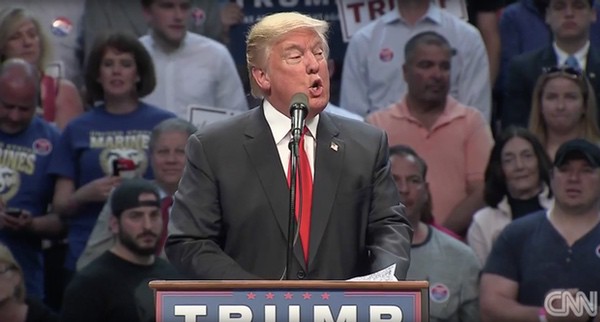 Speaking at a rally in Buffalo, New York yesterday, Donald Trump made a gaffe, referring to the 9/11 terrorist attacks with the name of a well-known convenience store.

“I wrote this out, and it’s very close to my heart,” he said at the outset of his remarks on Buffalo on Monday evening. “Because I was down there and I watched our police and our firemen down at 7/11, down at the World Trade Center right after it came down. And I saw the greatest people I’ve ever seen in action.” The businessman did not correct himself.

Trump is poised to win a lion’s share of the delegates in New York’s primary on Tuesday, and he has held up the city’s response to the September 11, 2001 terrorist attacks as a defining “New York value.”

And then there’s this. Donald helped clear the rubble:

Trump claims he helped clear rubble and search for survivors on 9/11: pic.twitter.com/G3yodnBMK2