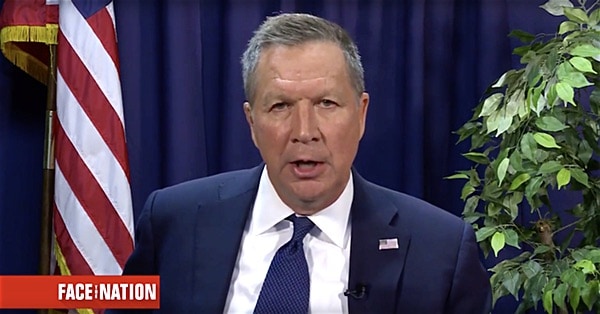 On Face The Nation this morning, Republican presidential candidate and Ohio Governor John Kasich was asked about North Carolina’s recently-passed anti-LGBT law and whether or not he would have signed it.

Kasich said “I wouldn’t have signed that law” and criticized so-called “religious freedom” bills in general.

Watch and read the full transcript below:

JOHN DICKERSON: Let me ask you a question about something that your colleague, a governor in North Carolina did. He signed a law in North Carolina that banned anti-discrimination protections based on sexual orientation. It also mandated that transgender people use public bathrooms based on the sex indicated on their birth certificates. Would you have signed that law?

GOVERNOR JOHN KASICH: Probably not. I mean, look, we are not having this issue in our state about this whole religious liberty. I believe that religious institutions ought to be protected and be able to be in a position of where they can– they can, you know, live out their– their deeply held religious purposes. But when you get beyond that it gets to be a tricky issue. And tricky is not the right word but it can become a contentious issue. But in our state we’re not facing this. So everybody needs to take a deep breath, respect one another, and the minute we start trying to write laws things become more polarized, they become more complicated, obviously, I don’t want to force people to violate their deeply held religious convictions but we’d have to see what that’s all about. I wouldn’t have signed that law. From everything I know I haven’t studied it. But Nathan Deal, the governor of Georgia, vetoed another one. And, look, you just got to see what the laws are and what the proposals are. And why you need to write a law? Why do we have to write a law every time we turn around in this country? Can’t we figure out just how to get along a little bit better and respect one another? I mean that’s where I think we ought to be. Everybody, chill out, get over it if you have a disagreement with somebody. So, that’s where I am right now, John. And unless there’s something that pops up, I’m not inclined to sign anything.