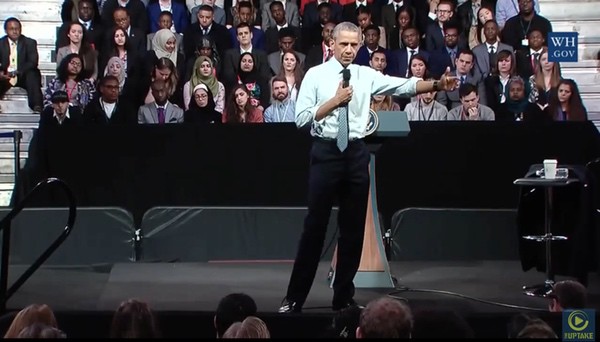 President Obama held a town hall before 500 young leaders in London today and much of it focused on social issues. Obama took questions from the crowd.

One young activist asked Obama which social activist campaigns have caused him to change his mind on issues. President Obama brought up marriage equality, and partly credited his daughters, as well as marriage equality activists and gay couples for explaining to him why marriage, rather than civil unions, were necessary.

“In the United States what has been remarkable is the rapidity with which the marriage equality movement changed the political landscape and hearts and minds and resulted in actual changes in law. It’s probably been the fastest set of changes that, in terms of the social movement, that I’ve seen. On issues of LGBT rights generally I didnt need a lot of pressure. I came in working on ending a policy called Don’t Ask, Don’t Tell that was preventing LGBT citizens from serving in our military openly. We did that very systematically. Policies in terms of those who had HIV AIDS being able to emigrate to our country, hospital visitations, there were a whole host of things that we were already doing.

“But on marriage equality I was in favor of what’s called civil unions. My notion was initially that labeling those partnerships as marriage wasn’t necessary as long as people were getting the same rights and it would disentangle them from some of the religious connotations that marriage had in the minds of a lot of Americans.

“And that’s where I think…I have to confess that my children generally had an impact on me. People I loved who were in monogamous same-sex relationships explained to me what I should have understood earlier. Which is it was not simply about legal rights but about a sense of stigma – that if you’re calling it something different it means less in the eyes of society. I believe that the manner in which the LGBT community described marriage equality as not some radical thing but actually reached out to people who said they care about family values and said ‘if you care about everything that families provide – stability and commitment and partnership – then this is actually a pretty conservative position to take, that you should be in favor of this.’ I thought there was a lot of smarts in reaching out and building and framing the issue in a way that could bring in people who initially didn’t agree with them.”

Obama then continued with his answer, talking about Black Lives Matter, how activism should work, and getting people to the table.