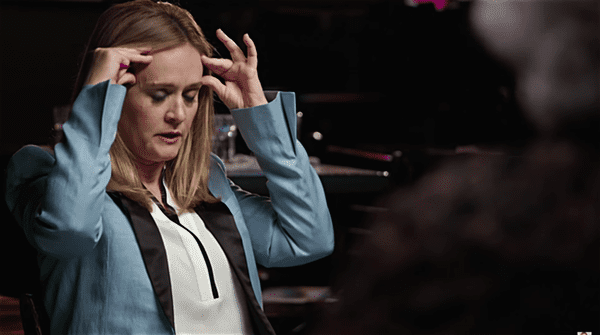 Samantha Bee spoke with a group of Bernie Sanders supporters in New York to get to the heart of why the #FeelTheBern crowd are so optimistic.

Bee told her diverse group of ‘Bernie Bros’, “I’m not here to bash Bernie. I’m just here to understand your optimism, and stick my fingers in it, and just roll it around in my hands, and restore myself to the person I used to be.”

Bee then played a game of word association with her focus group of sorts, first mentioning Hillary Clinton. When everyone had a negative reaction to Clinton, Bee asked, “do you think she’s too much in the pocket of big realistic expectations?”

Bee wanted to understand how Bernie supporters think he will be able to usher in sweeping progressive changes when President Obama–who was elected with a substantial majority in both the electoral college and popular vote–faced an unprecedented level of Republican obstruction despite his significant grassroots support.

“It takes a movement to get this stuff done,” said one supporter.

Another offered, “The difference is that the people will rise and stay awake after Bernie is elected.”

But Bee wasn’t having it:

“So are you literally saying to me right now that the difference between Obama and Bernie Sanders is that the people of America are going to continue to be motivated within the political process, and they’re going to keep putting pressure on our elected leaders to make change? Have you met people?”

Despite all the fun Bee had at the expense of Bernie supporters, she admits that she still admires them. Says Bee, “I respect these people’s unshakable willingness to dream big.”